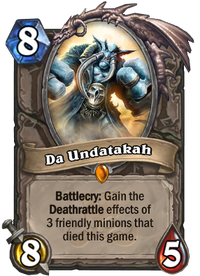 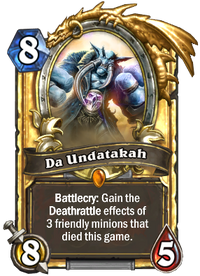 Da Undatakah is a legendary neutral minion card, from the Rastakhan's Rumble set.

Da Undatakah can be obtained through Rastakhan's Rumble card packs, or through crafting.

Da Undatakah works as a win condition for Deathrattle decks. This minion can be a major threat if it manages to copy deathrattles from sticky minions, having a threatening body and leaving a sizable board even after it's destroyed. Da Undatakah is however cripplingly weak to Silence and Transform effects, which negate its slow effect.

Like other deathrattles, you can trigger Da Undatakah with Play Dead or Feign Death, or destroy it using cards like Dark Pact. This tends to be high value since it compacts three effects into one.

You may choose to have at most 3 deathrattle minions in your deck to let Da Undatakah guarantee their effects, making him an effective combo card. These are a few examples:

Because Da Undatakah isn't a natural deathrattle, he will not be revived by cards like N'Zoth, the Corruptor and Twilight's Call.

Da Undatakah is unique to Hearthstone.