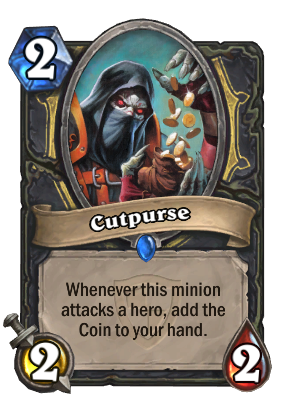 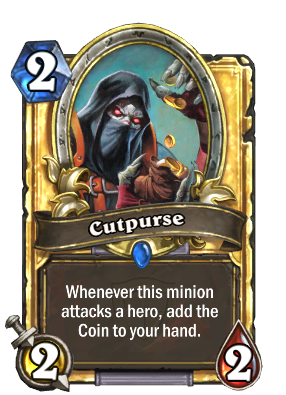 Uncollectible
Whenever this minion attacks a hero, add the Coin to your hand.
Flavor text

He has a giant collection of purses now. One for every outfit!

Cutpurse is a rare rogue minion card, from the Grand Tournament set.

Cutpurse can be obtained through The Grand Tournament card packs, or through crafting.

As The Coin is a zero-mana spell, it is very useful for triggering Combos. Played early, this minion can manage a free attack, two if you're lucky before being removed. In many cases however this minion is subpar, as its poor statline makes it easy to remove and its ability makes it a higher value target than other 2-drops. For a guaranteed Coin at a higher statline, consider Tomb Pillager instead.

Summon
What 'cha got there?
Attack
Ca-ching!
Death
I was robbed...