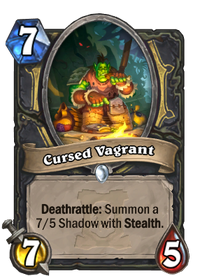 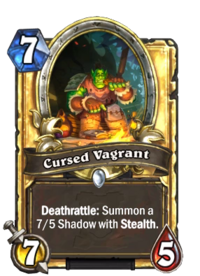 Little did he know… it was really the talbuk leg that was cursed.

Cursed Vagrant is a common rogue minion card, from the Ashes of Outland set.

Cursed Vagrant can be obtained through Ashes of Outland card packs, through crafting, or as an Arena reward. 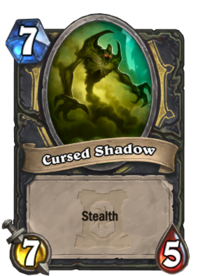 Cursed Vagrant may be weak for its cost, but its high Attack makes it good for trading and its Deathrattle enables you to summon a free Ravenholdt Assassin, whose high Attack mixed with Stealth can allow you to deal heavy damage next turn without any risk of being killed by enemy minions. If your opponent avoids it in caution, you can use Deathrattle synergy cards like Necrium Blade and Necrium Vial to summon more Cursed Shadows. It is also possible to bring its effect out sooner by having Necrium Apothecary copy its Deathrattle.