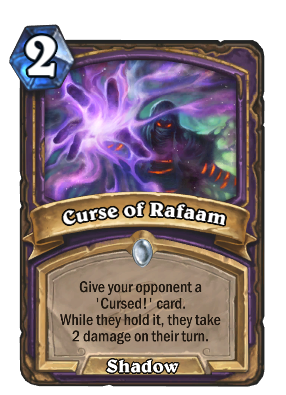 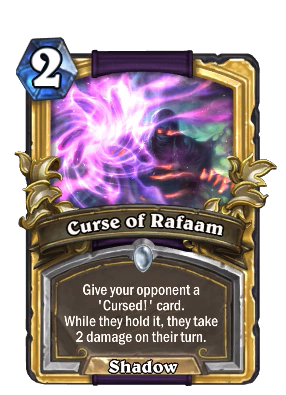 Give your opponent a 'Cursed!' card. While they hold it, they take 2 damage on their turn.
Flavor text

This is what happens when Rafaam stubs his toe unexpectedly.

Curse of Rafaam is a common warlock spell card, from the League of Explorers set.

Two copies of regular Curse of Rafaam are obtained by defeating Arch-Thief Rafaam, the third boss in The League of Explorers's fourth wing, the Hall of Explorers.

As a Wild-format card, both regular and golden versions of Curse of Rafaam can also be crafted for the following amounts: 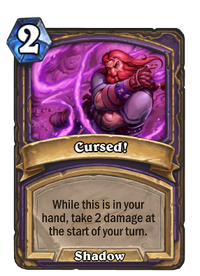 This card is all about timing. You want to play this card to disrupt your opponent from making optimal plays. For example if you know your enemy has a play in mind for a turn you would play this to force them to choose between doing that play or getting rid of the Cursed! card. The longer they wait to get rid of it the closer you get to being able to end the game in an aggressive play style.

If the opponent plays Cursed! immediately, Curse of Rafaam could be considered a 2 damage for 2 mana spell. However, since it costs just as much mana to get rid of Cursed! as it does to cast Curse of Rafaam, it could also be considered "free" damage. The longer they hold it, the greater the damage and therefore the mana efficiency of the card.

It is best used during the early game, and especially in an aggro/midrange play style as the longer the game goes on the easier it becomes your opponent to get rid of your spell. However, late game this card also has excellent synergy with Loatheb on turn seven or later, since then the opponent must either hold it for one more turn or waste nearly the entire turn to avoid the extra damage.

The card has excellent synergy against a Shaman who will be facing Overload during the next turn. You can also use this card to play around a Mage's Ice Block as the Cursed! will deal damage on their turn, without triggering Ice Block. However, try not to play Curse of Rafaam against someone who may have spell synergy minions like Archmage Antonidas, Gadgetzan Auctioneer, or even Questing Adventurer, since Cursed! is a relatively low-cost spell that will still trigger spell-related effects.