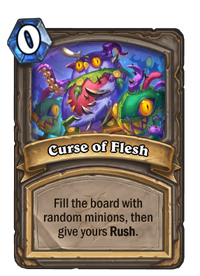 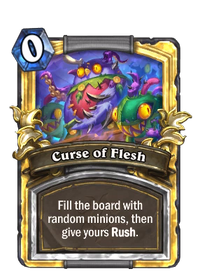 Fill the board with random minions, then give yours Rush.

Curse of Flesh is an uncollectible neutral spell card that can be cast by Yogg-Saron, Master of Fate. 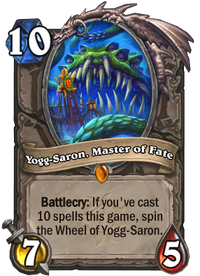 The Curse of Flesh is a malady created by Yogg-Saron, designed to turn the Titan-forged, the creatures of stone and metal created by the keepers, into fleshy, corruptible mortals. This card's art does not appear to depict the curse's historical use, though, instead depicting the curse being used to cause inanimate stuffed animals to come alive under the Old Gods' influence.

During the ordering of Azeroth, the titans of the Pantheon were unable to kill the Old Gods without completely destroying the planet, thus they were neutralized and contained within prisons. The titans left behind beings called keepers as jailers of the Old Gods' prisons. Thereafter, the keepers created machines to produce new titan-forged, one of those was the Forge of Wills.

A long time after, the Old God Yogg-Saron, imprisoned within Ulduar, sensed a great disturbance in the keepers that were in charge of guarding his prison. This disturbance was caused by the death of the Pantheon. Yogg-Saron used this chance to weaken his jailers. By corrupting the Forge of Wills, tainting it with a malady known as the Curse of Flesh, any titan-forged being created by it will fall victim to the infection, and it will even spread to the previous generation. The Curse of Flesh will transform the titan-forged into mortal beings of skin and flesh, in order to "facilitate assimilation".

Yogg-Saron then proceeded to corrupt the keeper Loken, tricking him to create an army with the Forge of Wills and attack his former allies. He realized his mistake too late, as he noticed the dark affliction on his army. After Loken's betrayal many titan-forged were exiled, the first to be affected by the curse were the vrykul, whose metallic skin became brittle and weak. Generations later, the afflicted vrykul continue to degenerate into mortal beings later known as humans. Many other titan-forged - mechagnomes, tol'vir, mogu, and giants - would suffer a similar fate. However Yogg-Saron's plan had unintended consequences, it gave rise to mortal qualities of necessity: courage, resolve, and heroism.

The keepers attempted to cure the curse and extirpate the symbiotic infection unsuccessfully. Highkeeper Ra lost faith when he discovered the titans of the Pantheon had vanished and Azeroth had been infested by the Void's Old Gods, and he secluded himself from society. Keeper Archaedas and his companion Ironaya spent too much time thinking on how to cure the curse, becoming obsessed with it, until eventually entering a long period of hibernation. Unable to cure the Curse of Flesh, mechagnomes and later the earthen would be afflicted by it.