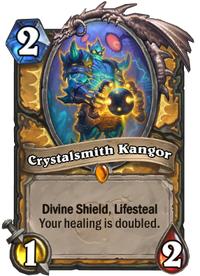 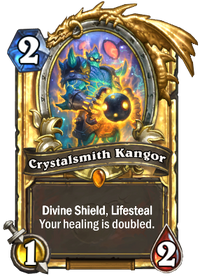 He wants to tank, but Boom always makes him play support.

For the boss of the same name, see Crystalsmith Kangor (boss).

Crystalsmith Kangor is a legendary paladin minion card, from The Boomsday Project set.

Crystalsmith Kangor can be obtained through The Boomsday Project card packs, or through crafting.

Crystalsmith Kangor is a powerful healing stim. He's best played directly before a healing card, doubling its healing power. Some of the best targets are Flash of Light, Zilliax, Forbidden Healing, and Uther of the Ebon Blade's Grave Vengeance. Since Kangor has Lifesteal, his own attacks will heal you for 2. This makes him decent at cleaning up tokens if he survives a turn. He also gains a large benefit from buff cards like Blessing of Kings, which stack with both his Divine Shield and Lifesteal.

You can pair Kangor with Crystallizer and High Priest Thekal to make use of his healing bonus early, possibly summoning an active Zandalari Templar at an early stage.

At 2 mana with a decent on-board effect, Kangor can be summoned by Call to Arms.

Blackguard can follow Kangor for powerful damage combos. When active, Kangor and Blackguard can transform Forbidden Healing into a hit kill damage.

Multiple Kangors can stack. By combining Gift of Luminance with Kangor, you can restore your entire Health with one Flash of Light. This effect works for damaging too, Blackguard can deal with every target using this combination.

Kangor is unique to Hearthstone. He is a crystal golem who makes lasers by focusing the power of The Light.[1]

Ah! Hello my child. It is always good to see a fellow inorganic sentience. What brings you to brighten my doorstep?

I would be delighted to shed some light on my work for the good Dr. Boom!

Observe the crystal arrays in my laboratory. That’s no ordinary light they are channeling. It’s Light. THE Light. The least understood and most powerful energy source in the known universe. An object of fascination and devotion. Instrumental in shaping and saving whole civilizations. A power that is eternal, immense, and immeasurable.

But what if we could amplify it? Enhance it? Focus it. What could we accomplish then?

I will illuminate you: LASERS! Holy lasers!

They don’t just make holes. Certainly, in the wrong hands they could have vast destructive potential, but who would do such a thing?

With the correct crystal harmonics, we can create arcano-electro-cerebrums that are far faster and more intelligent than organic beings can imagine! Artificial LIFE, unbound by the mortality that plagues fleshly beings! I have a vision of the future—a vast society of Mechs that are smarter and stronger than any organic, and as eternal as the Light that powers them. Perfect. Precise. United! A bright future, made possible by my lasers.

Of course! Where do you think the crystals Zilliax bears came from? Who do you think designed the crystals in your arcano-electro-cerebrum? In fact, I just developed an upgrade, and you’ll receive the very first one.

What is this—a control unit? Unacceptable! Who would want to inhibit your higher processes? I’ll just remove that and add a subroutine so you can upgrade your friends too.

There. All better! Now, where are you off to next, little one?

Flark? Hmph. Then you’ll need this.