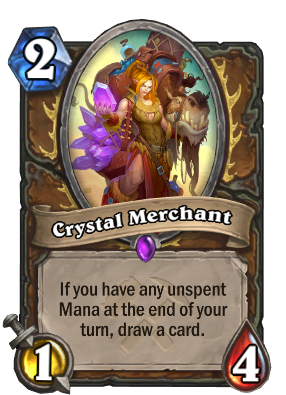 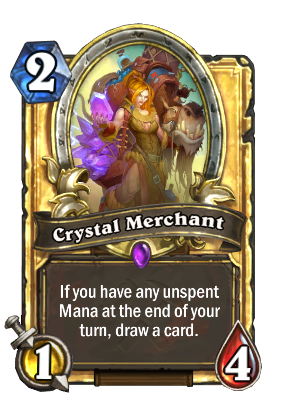 If you have any unspent Mana at the end of your turn, draw a card.
Flavor text

I won't ask about your mana curve if you don't ask where I got these.

Crystal Merchant is an epic druid minion card, from the Saviors of Uldum set.

Crystal Merchant can be obtained through Saviors of Uldum card packs, or through crafting.

Crystal Merchant has great synergy with Untapped Potential, allowing you to draw a card to make up for the unspent Mana that Quest requires.

Crystal Merchant is a sand troll.

Sand trolls are a subspecies of jungle trolls that dwell in the Tanaris desert. The subspecies arose by adapting to the beating of the hot Tanaris sun after being separated from their Eastern Kingdoms brethren in the Great Sundering.

A sand troll empire has never been formed - in fact the only known tribes of sand trolls are the Farraki (also known as the Sandfury) and Sandscalp tribes. Sand trolls mostly keep to themselves and attack all outsiders.