This article is using {{Card template}}.
See Help:Style guide/Card for how to edit this kind of article.
Edit this article
Crypt Lord
43025 • ICC_808
Regular 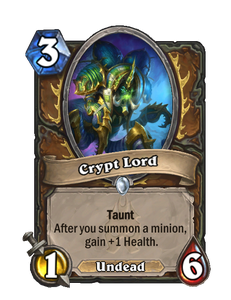 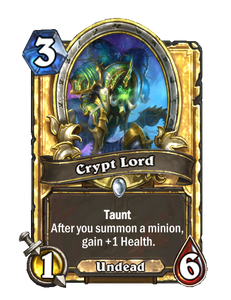 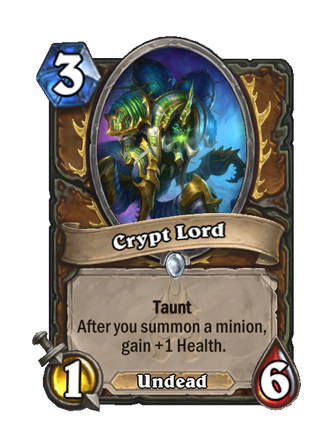 Crypt Lord is a common druid minion card, from the Knights of the Frozen Throne set.

Crypt Lord's main strength is its health, increasing for every minion you summon. It works well with aggressive Druid decks, protecting other low-cost minions.

Spreading Plague combo with Crypt Lord as they can mass summon minions effectively, increasing its health. It has similar effects to

Darkshire Councilman, but gaining 1 health rather than 1 attack.

Though it has one attack for a taunt, the amount of health it can offer can survive multiple hits from enemy minions or spells and makes it harder to clear out. Compare and contrast to

Tar Creeper, a similar early-game taunt which offers higher attack on the opponent's turn, in exchange for passing up the health gain potential.

Crypt lords are undead nerubian spiderlords of the subterranean spider kingdom of Azjol-Nerub. Crypt lords are adept at summoning insect minions and crushing enemies. Betraying the nerubian people, the crypt lords have sacrificed the lifeblood of thousands to bolster the undead armies of Ner'zhul, winning an eternal life of servitude in his name.