This article is using {{Card template}}.
See Help:Style guide/Card for how to edit this kind of article.
Edit this article
Cryostasis
42676 • ICC_056
Regular 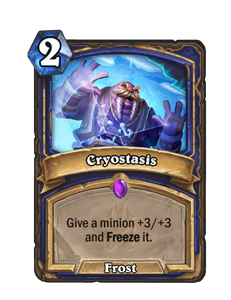 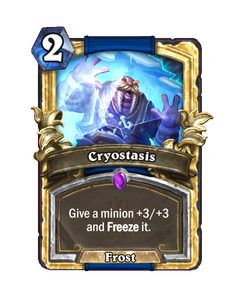 We'll thaw you out when we find a cure! 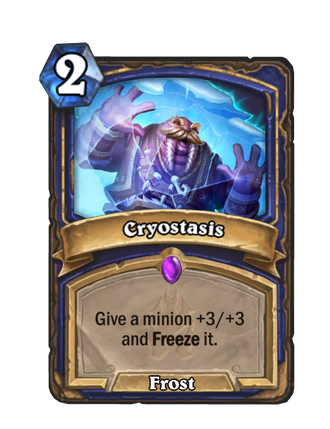 Cryostasis is an epic shaman spell card, from the Knights of the Frozen Throne set.

Cryostasis is a multi-purpose card heavily designed for Freeze Shaman decks. It can be utilized as a cheap buff effect on friendly minions, or it can be used for it's Freeze effect, allowing it to activate cards such as

In Arena, Cryostasis can be a reasonable choice. In a lot of situations, it can be used for it's buff effect, as it's difficult to draft enough Freeze synergy to utilize that effect positively, and the buff can be used on a Taunt minion to make it more awkward to remove, or make a high-value minion with an active effect more difficult to deal with efficiently.