This article is using {{Card template}}.
See Help:Style guide/Card for how to edit this kind of article.
Edit this article
Cryomancer
40988 • CFM_671
Regular 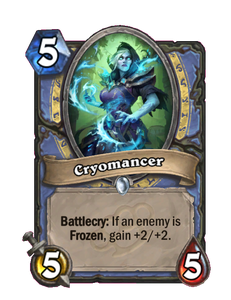 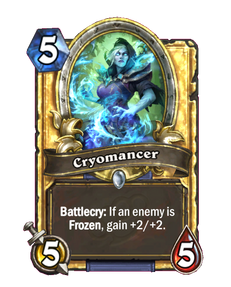 She loves Frozen. I mean who doesn't? 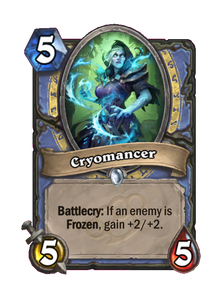 Cryomancer is a common mage minion card, from the Mean Streets of Gadgetzan set.

When its Battlecry condition is not met, Cryomancer's 5/5 stats are adequate, though not ideal, for its Mana cost. To guarantee optimal value for this card, however, you will need to Freeze an enemy when playing this, which means that this card works best in a deck with many Freeze effects. Most of these cards are spells, such as Frostbolt, though certain minions such as Water Elemental can work as well. In scenarios where your opponent has an empty board, it may be worth considering targeting your opponent's face with a low-value Freeze, such as Glacial Shard, in order to activate Cryomancer's Battlecry.

Most constructed mage decks, even those with many Freeze effects such as Freeze Mage, have a spell-based win condition. In these decks, even a 5 mana 7/7 provides little value. Therefore, Cryomancer excels mostly in Arena, where she can provide a significant amount of tempo in a deck with enough Freeze synergy.

This card's flavor text is a reference to the 2013 Disney movie Frozen.