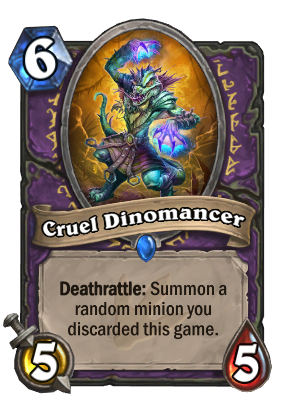 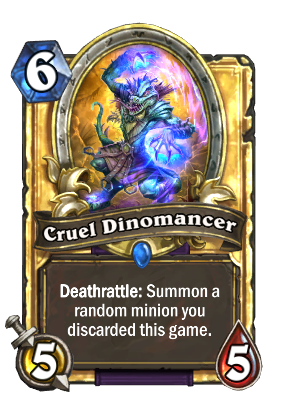 As that old saying goes: "you don't get into dinomancing to make friends."

Cruel Dinomancer is a rare warlock minion card, from the Journey to Un'Goro set.

Cruel Dinomancer can be obtained through Journey to Un'Goro card packs, or through crafting.

This card acts as a way to "resurrect" minions that have been lost due to Discards. It can potentially summon minions like Doomguard, and will ignore the negative Battlecry. This minion becomes far less valuable when you discard worse minions like Flame Imp or Kabal Courier, and is worthless if you've only managed to discard spells.

This minion fits well with Lakkari Sacrifice. While it doesn't discard anything itself, a Lakkari deck highly encourages discarding, making this a perfect fit. Just be wary that it can conflict with cards that are desirable to discard such as Silverware Golem and Clutchmother Zavas, which have great effects upon being discarded but aren't desirable targets for Cruel Dinomancer.

Summon
I am the greatest dinomancer!

Dinomancers are individuals who have mastered the art of controlling dinosaurs, occasionally even being able to shapeshift into the great beasts. They are primarily found among the Zandalari trolls, but the Un'Goro Madness micro-holiday in World of Warcraft features Akaridal, a saurok dinomancer of the Skumblade tribe.