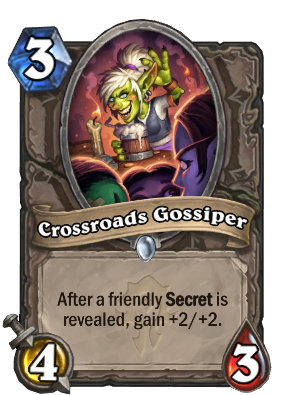 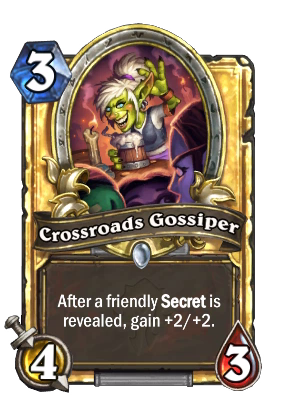 After a friendly Secret is revealed, gain +2/+2.
Flavor text

Not afraid to spill the tea.

Crossroads Gossiper is a common neutral minion card, from the Forged in the Barrens set.

Crossroads Gossiper can be obtained through Forged in the Barrens card packs, through crafting, or as an Arena reward.

Crossroads Gossiper is used in Secret-based decks from Hunter, Mage, Paladin, and even Rogue.

Though it is best used in Paladin decks as they can cheat out with Sword of the Fallen , Desperate Measures, or Mysterious Challenger. Even without them, the secrets cost 1 mana each which makes it very easy to build up stats from Crossroads Gossiper.

It synergizes with Redemption well since it will come back as a 6/3 and can gain +4/+4 with Commander Rhyssa.

Should it die, it can be revived with Rally

Mages can also use this as well as they have Kirin Tor Mage and Kabal Lackey to allow to play secrets for no mana cost.

Mad Scientist and Inconspicuous Rider can put secrets into play which they are be able to activate secrets easier.

Because of how impactful Crossroads Gossiper big buffs are, it can become a heavy snowball threat not to mention it can still be buffed by Paladin Spells or can cheese big burst with Battleground Battlemaster.