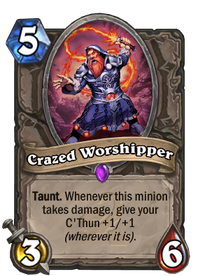 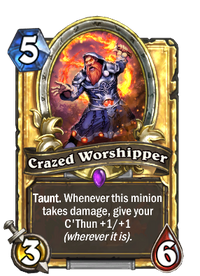 Taunt. Whenever this minion takes damage, give your C'Thun +1/+1 (wherever it is).

Every month they share a pancake breakfast with the Perfectly Rational Worshippers.

Crazed Worshipper is an epic neutral minion card, from the Whispers of the Old Gods set.

Crazed Worshipper can be obtained through Whispers of the Old Gods card packs, or through crafting.

Although this minion might seem slightly overcosted for its stats, it is a decent pick. Its Taunt ability makes the Crazed Worshipper a priority target, useful to cover more vulnerable minions. It combines well with cards that deal damage across the board (Like Whirlwind) or as part of their Battlecry (Like Cruel Taskmaster), boosting C'Thun while remaining a menace. Even without synergistic effects, it can be very effective against Zoo decks or any opponent lacking single target removal or a sufficiently large minion.

Summon
I bleed for C'Thun.