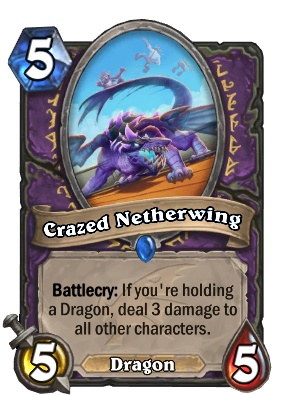 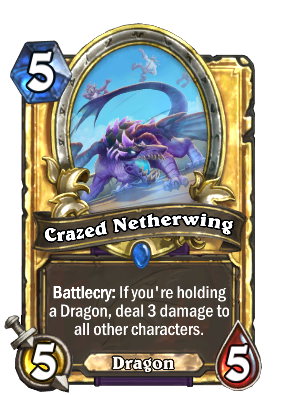 Uncollectible
Battlecry: If you're holding a Dragon, deal 3 damage to all other characters.
Flavor text

Crazed Netherwing is a rare warlock minion card, from the Descent of Dragons set.

Crazed Netherwing can be obtained through Descent of Dragons card packs, or through crafting.

Effectively a Hellfire for 1 mana more in exchange for a 5/5 body, or alternatively a bigger Duskbreaker, Crazed Netherwing is a very powerful anti-aggro card for Dragon-based Control Warlocks. The Battlecry is often enough to wipe out a board of tokens or smaller minions, and the decently-statted body allows it to effectively contest any follow-up threats from the opponent. The card's primary drawback is the self-damage, which can potentially open you up to burst damage if played while low on health, but can be used to your advantage with cards like Zzeraku the Warped or Lesser Amethyst Spellstone.

If played late or if it survives a turn, Dragon Breeder can be used to duplicate this card for more board clears.