This article is using {{Card template}}.
See Help:Style guide/Card for how to edit this kind of article.
Edit this article
Crazed Alchemist
801 • EX1_059
Regular 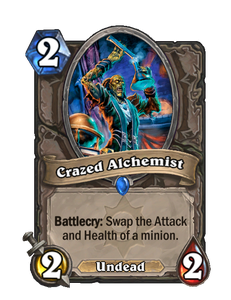 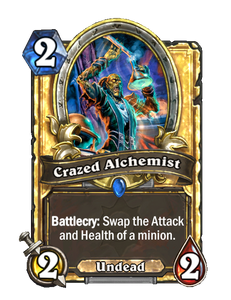 "You'll love my new recipe!" he says... especially if you're not happy with your current number of limbs. 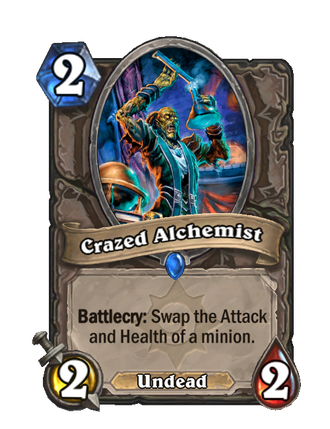 Crazed Alchemist is a rare neutral minion card, inducted into the Legacy set, formerly from the Classic set. 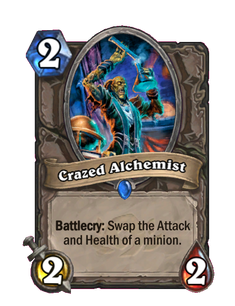 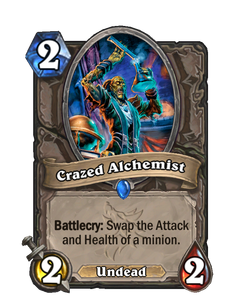 Crazed Alchemist are obtained for raising sum of all your class levels to 42.

Two copies of golden Crazed Alchemist (Core) are obtained for winning 1000 games across all classes.

Crazed Alchemist (Core) is uncraftable and cannot be crafted or disenchanted.

Oasis Snapjaw to deal some unexpected damage, or on zero-Attack minions such as

Nat Pagle as a form of removal.

Crazed Alchemist can also be used in conjunction with

Marin the Fox, as it can instantly kill the treasure chest without needing to deal 8 damage to it, it can also serve as a back-up

Topsy Turvy in combo decks for when

Rebuke is played to prevent the combo.

The Crazed Alchemist resembles the Forsaken Royal Apothecary Society in World of Warcraft.

When people think of witch doctors, they usually don’t think of Forsaken. However, Forsaken are some of the most skilled alchemists on Azeroth, and while they don’t entreat voodoo spirits for help and don’t call their craft “mojo,” they still possess tricks to make their brews especially potent. These Forsaken call themselves apothecaries.

The iconic apothecary is a withered Forsaken standing in a laboratory. Beakers and cauldrons bubble and spew horrible vapors into the air.