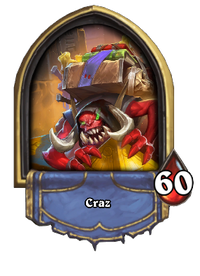 This belong to Craz! Go away, or Craz will bring his tiny friends!

Craz is a boss that can be encountered initially in Chapter 3 of Tombs of Terror. After completing Chapter 3, this boss encounter will be available in any completed chapter.

On Normal difficulty Craz plays a hybrid of lackey deck and demon buffs. However, the main difficulty at the beginning of the game is his hero power since he will often use it and rarely summons bad demons. Moreover, it allows Craz to do not play his cards. Thanks to these conditions, the boss takes up the board very quickly and easily defeats the player if his deck does not have a similar tempo. Thus, the main objective is to take over the board as fast as possible, otherwise the player will not be able to constantly fend off lackeys and endless demons.

Heroic deck is Discard Warlock with several heavy cards that simplify the player's game rather than enhance Craz. Hero power of Craz still will be summoning demons for 2-3 mana mostly because the demons for 4-5 mana are currently significantly less. In general, this battle is not much harder than in Normal mode since Craz mainly uses hero power when he starts playing by "topdecks". Like in normal mode, take over the board as fast as possible, and if it is possible steal Nether Portal using Crawling Claw.

In both modes the most powerful passive is Crook and Flail. Alchemist's Stone, Glyph of Warding, and Rocket Backpacks will also help strongly.

Craz
Nooo, don't have any treasure. Actually very poor.
You here to take loots? Get out get out get out! (vs. Reno Jackson)

Craz
A little help?
Do me a favor; hit them.
Leave Craz alone!
Uh, distraction!
Watch my stuff!

Craz
Can we move this along? I got places to be!
I'll take any spare change you have...
I'm not an imp. I'm way more scary!

Oh, I didn't summon that?

Whoaaa. I could be VERY rich stealing all those lamps!

Craz
Whoa, I did it? Really?

Craz is unique to Hearthstone. He is a wyrmtongue.