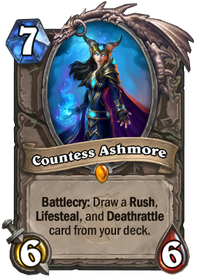 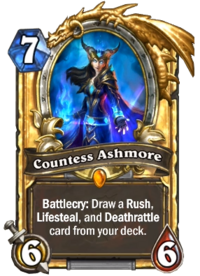 Battlecry: Draw a Rush, Lifesteal, and Deathrattle card from your deck.
Flavor text

Countess Ashmore is a legendary neutral minion card, from the The Witchwood set.

Countess Ashmore can be obtained through The Witchwood card packs, or through crafting.

This means that having only the cards Obsidian Statue and Spirit Lash in the deck makes Countess Ashmore have a 50% chance of not drawing the Spirit Lash.

Cards drawn can be spells and weapons, and are not limited to minions.

Similar to The Curator, Countess Ashmore is both a source of card advantage and a way to draw specific cards from your deck. Although a weak tempo play, this can be compensated with strong Deathrattle taunts like Rotten Applebaum and Rush minions which are able to get the tempo back. The card can also be used in conjunction with Vicious Scalehide and Dire Frenzy. Dire Frenzy buffs your Vicious Scalehide and shuffles three 4/6 Rush Lifesteal minions into your deck. Playing Ashmore lets you reliably draw them afterwards to make full use out of this combo.

This card is good for drawing important cards from a deck, such as Hadronox in Taunt-Cube Druid.

Ashmore is unique to Hearthstone. Though she is disguised as an elf, she is actually a member of the blue dragonflight.[3]

The Countess is an enigma. No one in Gilneas seems to have heard of her noble line prior to the Witchwood curse, but suddenly, the records show an Ashmore family tree stretching all the way back to pre-Alliance days, written in a hand none of the royal scribes recognize. She’s taken up residence in an old manor that’s been abandoned since before the first battle of Gilneas, but while some claim that many voices can be heard emerging from the old estate, she’s the only one who’s been seen entering or leaving. Rumor has it that she’s researching the curse, and she’s been seen asking questions of those who claim to have witnessed dragons in the wood.

Is she truly the scion of a forgotten noble family returned home in a time of great need? Or something much more dangerous?[4]