This article is using {{Card template}}.
See Help:Style guide/Card for how to edit this kind of article.
Edit this article
Counterspell
113 • EX1_287
Regular 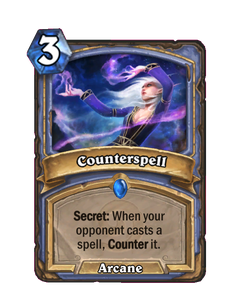 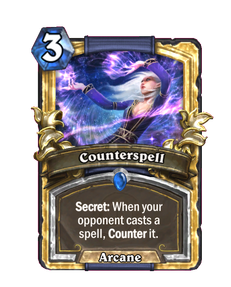 What's the difference between a mage playing with Counterspell and a mage who isn't? The mage who isn't is getting Pyroblasted in the face. 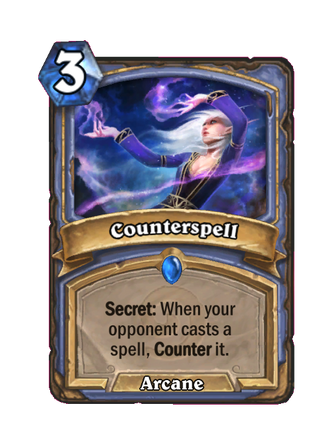 Counterspell is a rare mage spell card, inducted into the Legacy set, formerly from the Classic set. 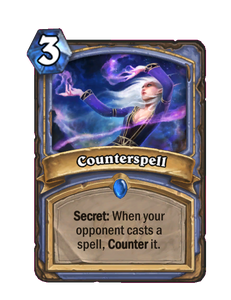 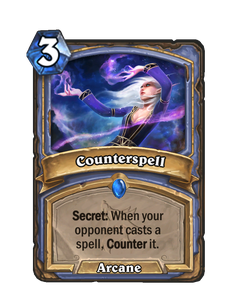 Counterspell are obtained for raising mage to level 6.

Two copies of golden Counterspell (Core) are obtained for winning 100 games as mage.

Counterspell (Core) is uncraftable and cannot be crafted or disenchanted.

Flamestrike. It makes sense to play Counterspell the turn before the spell can be cast. If the opponent then tries to cast a spell that gets countered, it will still use their mana which then guarantees a weak turn. Counterspell can also be set up if you want to prevent healing spells such as

Lay on Hands to finish the game faster.

Since Counterspell is a secret, it synergizes with minions such as

Arcanologist, that can draw the card from your deck, or

Inconspicuous Rider, which can cast it outright. Comboing the secret with minions like

Kabal Crystal Runner can provide you with a tempo advantage while also protecting your minions from spells.

When attempting to counter Counterspell, try casting a weak or unimportant spell first.

The Coin and Spare Parts are excellent choices for this.

Counterspell is a mage spell from World of Warcraft which interrupts a target's spellcasting, locking them out of that school of magic for several seconds. Higher levels of the ability also silence the target for a few seconds. The spell also features in the World of Warcraft Trading Card Game.