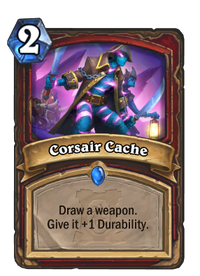 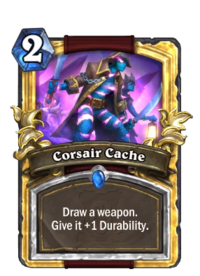 Draw a weapon.
Give it +1 Durability.

Where's a corsair's favorite place to hide treasure? Under their deck!

Corsair Cache is a rare warrior spell card, from the Ashes of Outland set.

Corsair Cache provides a guaranteed weapon draw, while also giving a small 1 Durability buff. The spell curves perfectly into Warrior's many 3-mana weapons. It works well with weapons that gain extra bonuses from the durability, such as Ancharrr, Livewire Lance, Wrenchcalibur, and Bulwark of Azzinoth. Since it also lets you swing an extra time, Corsair Cache is still good with less synergistic weapons like Arcanite Reaper and Reaper's Scythe.

The only downside of Corsair Cache is slowing down a weapon's Deathrattle. Decks with Death's Bite and Blood Razor may prefer Forge of Souls to fetch their weapons.