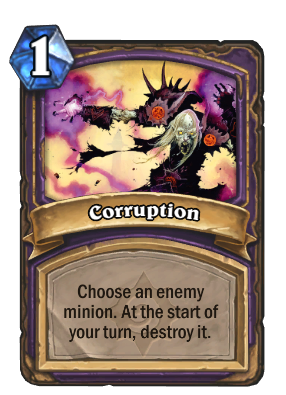 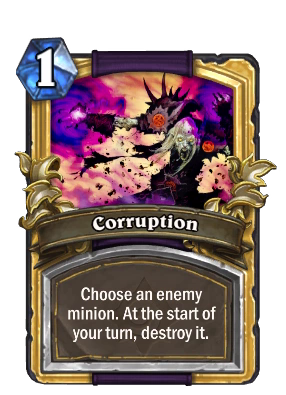 Choose an enemy minion. At the start of your turn, destroy it.
Flavor text

It starts with stealing a pen from work, and before you know it, BOOM! Corrupted!

Corruption is a warlock spell card, inducted into the Legacy set, formerly from the Basic set. 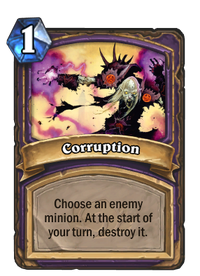 Two copies of regular and golden Corruption are automatically given after the player completes the Ranked's New player experience system, unlocking Wild and Classic format.

As a 1 mana card Corruption is one of the cheapest ways to destroy a minion. Corruption will not kill the minion upon cast but will take effect at the start of your next turn.

Be aware that your opponent will see which minion you have cast Corruption upon, and may therefore choose to use that minion to deal as much damage as possible before the next turn - even if it destroys the minion in the process. This still has the desired effect - the destruction of the targeted minion - but may come at the cost of one of your own minions. For this reason, Corruption is ideal when played on a minion with low attack, or when you have a cheap taunt or two such as Voidwalker in position to soak up any attacks.

This card synergizes with the Freeze effect, such as the Battlecry of a Frost Elemental. Since the targeted enemy minion cannot attack, it would die without being capable of gaining value, unless Silenced.

In World of Warcraft, Corruption is a Shadow-based warlock spell in the Affliction school that damages over time.