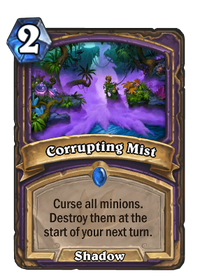 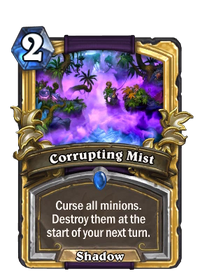 Curse all minions. Destroy them at the start of your next turn.

The most terrifying of Un’goro magics is both silent… AND deadly.

Corrupting Mist is a rare warlock spell card, from the Journey to Un'Goro set.

Corrupting Mist can be obtained through Journey to Un'Goro card packs, or through crafting.

This spell casts Corruption on all minions, for only one more mana than Corruption itself. It's obviously more powerful when your own board is empty or has few minions, since your own minions are affected as well. Minions you summon on the same turn after casting Corrputing Mist will not be affected, and neither will the minions your opponent summons on his next turn.

Affected minions are not destroyed immediately, but at the start of your next turn. Unless you also freeze your opponent's minions, your opponent will use the affected minions as effectively as possible without concern for their remaining health, because they will die anyway. Your opponent can also use silence effects and transform effects on their minions in order to bypass the corruption enchantment.

This card's effect may be based on the Tavern Brawl minion Lucifron, which exactly did the same effect with its Battlecry.

Previously: "Corrupt every minion. Destroy them at the start of your next turn."