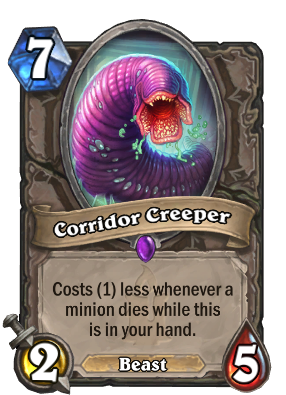 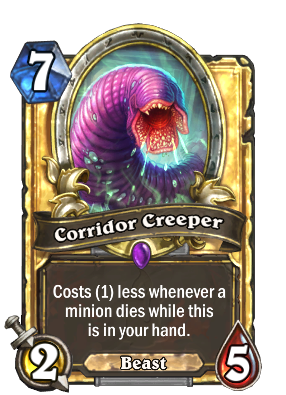 Costs (1) less whenever a minion dies while this is in your hand.
Flavor text

It likes the smell of dead things, which is curious, as it has no visible nose.

Corridor Creeper is an epic neutral minion card, from the Kobolds & Catacombs set.

Corridor Creeper can be obtained by:

Corridor Creeper's cost is affected by any minion death, meaning it's best played in a minion-based deck with emphasis on gaining the board control through trading, which results in the deaths of multiple both friendly and enemy minions. That way you can lower its cost to 0. In order to be efficient, at least 4 minions should be killed to get a mana-efficient card of 3 mana 2/5 body.

With 2 attack, the card is needed to be drawn early in the game, as over the course of the game its two attack becomes less relevant in comparison to more powerful late game cards. The later the card is drawn, the harder it is to drop its cost.

This card is a great Evolve target for creating 8-mana minions for a much lower cost. It's a good inclusion in Odd Paladin decks since its Mana cost can be lowered easily thanks to the myriad of Silver Hand Recruits summoned. Mages can use Conjurer's Calling with a cost-reduced Creeper to make a potentially threatening board for as low as 3 mana.

Before it was nerfed to having 2 Attack, players complaining about Corridor Creeper being overpowered created an eloquent poem for it:

In the dungeon I go deeper
in set reviews I was a sleeper
when minions die i get cheaper...
You guessed it right, I'm Corridor Creeper![1]

This joins Lord Jaraxxus and Huffer in the dubious category of "Cards With Fan Songs Made For Them".

After the nerf, the final line is sometimes modified to You guessed it right, I'm three attack weaker!