This article is using {{Card template}}.
See Help:Style guide/Card for how to edit this kind of article.
Edit this article
Corpsetaker
46102 • ICC_912
Regular 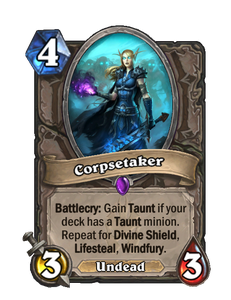 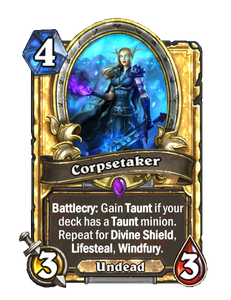 Her extensive collection of corpses includes one of nearly every type. She'd love for you to join it. 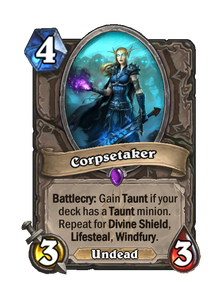 Corpsetaker is an epic neutral minion card, from the Knights of the Frozen Throne set.

This card is fairly weak at its base value, but giving it at least two keywords makes it worth its cost. While it may be tempting to build your deck to support all 4 keywords, it may result in your deck becoming inefficient. Also because its Battlecry is based on your deck, the later it's drawn the less likely you are to have cards with the required keywords in your deck.