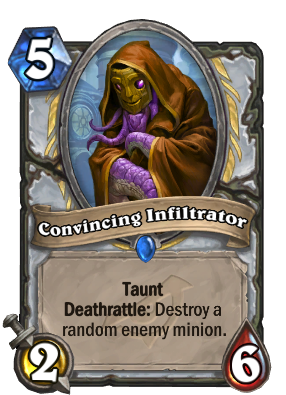 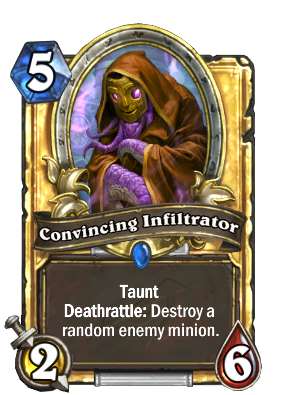 It's always nice to steal a familiar face.

Convincing Infiltrator is a rare priest minion card, from the Rise of Shadows set.

Convincing Infiltrator can be obtained through Rise of Shadows card packs, or through crafting.

A solid combination of stats with Taunt as well as potent Deathrattle. Because of this minion's high health and low attack, your opponent will almost always be able to choose when its Deathrattle activates. Try to play this when your opponent only has large or medium minions, increasing the chance that it hits a valuable target.

As the main purpose of this card is to trigger its powerful Deathrattle, copying cards such as Shadowy Figure or Grave Rune, or resurrecting cards such as Catrina Muerte or Mass Resurrection, pair well with this card. This minion, along with Khartut Defender, forms the core of many Resurrect Priest decks.

Like all destruction Deathrattles, you can play around this card by summoning multiple cheap minions on the turn you kill this, increasing the chance it hits something weak. Highlander decks can also counter Convincing Infiltrator by stealing it with Zephrys the Great into Cabal Shadow Priest.

Convincing Infiltrator works well with Divine Spirit and Inner Fire thanks to its low attack and high health.

The Convincing Infiltrator appears to be a Faceless one that is attempting to infiltrate Dalaran. Its name is rather ironic as its 'disguise' appears to simply be a brown cloak and flimsy wooden mask, neither of which do anything to hide its identity. The fact that this minion has taunt as opposed to stealth is likely a reference to how unconvincing its disguise is.