This article is using {{Card template}}.
See Help:Style guide/Card for how to edit this kind of article.
Edit this article
Consecration
476 • CS2_093
Regular 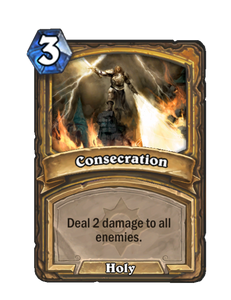 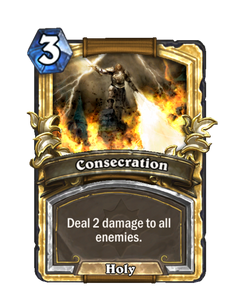 Consecrated ground glows with Holy energy. But it smells a little, too. 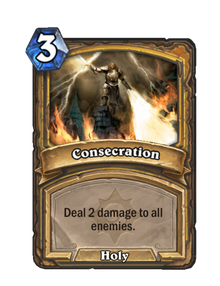 Consecration is a paladin spell card, inducted into the Legacy set, formerly from the Basic set. It deals 2 AoE damage to all enemies. 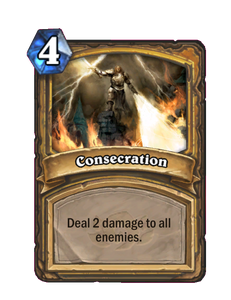 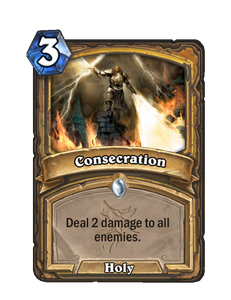 Regular and golden Consecration are uncraftable and cannot be crafted or disenchanted.

Two copies of regular Consecration are obtained for raising paladin to level 1.

Two copies of golden Consecration (Core) are obtained for winning 50 games as paladin.

Consecration (Core) is uncraftable and cannot be crafted or disenchanted.

This is the paladin's AoE spell, similar to Arcane Explosion or Fan of Knives. It is excellent for clearing the enemy field as well as 2 damage towards the hero. It is best used when there are numerous weak enemies, but it can still be helpful against any big monsters that need to be chipped away.

This card is highly recommended for almost any paladin deck. Two of the card are often taken, to ensure some direct damage and ways to destroy minions without using your own minions. It is also a good idea to pack this card if you are using Equality, which sets the health of all minions to 1, which will allow Consecration to clear the board of enemies.

A classic paladin spell, Consecration has seen active use since the beginning of World of Warcraft. The spell literally cleanses the ground of evil and makes it harmful for villains to tread (i.e. your opponents!). The spell effect has stayed the same since its invention and even its transfer to Hearthstone; it simply blesses a large amount of land and harms enemies on it. Any enemy of the light should watch out for the burns and pains caused by a paladin and his holy ground! Consecration is a periodic area of effect damage spell. Used by Protection paladins while tanking, it allows them to continually deal a small amount of damage to all nearby enemies, helping them to hold aggro and further enhancing these paladins' enviable damage output on multiple targets.