This article is using {{Card template}}.
See Help:Style guide/Card for how to edit this kind of article.
Edit this article
Cone of Cold
430 • EX1_275
Regular 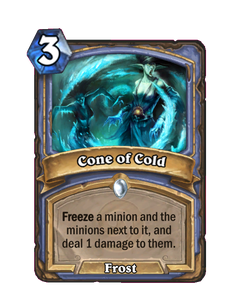 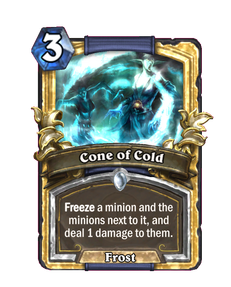 Dimensions: Full • 330 x 410px
Freeze a minion and the minions next to it, and deal 1 damage to them.
Flavor text

Magi of the Kirin Tor were casting Cubes of Cold for many years before Cones came into fashion some 90 years ago. 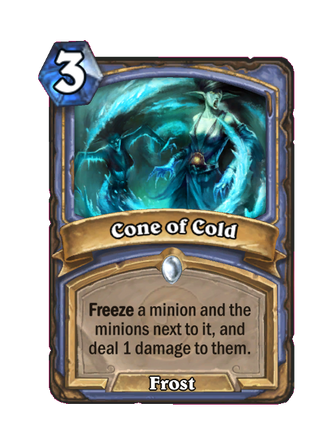 Cone of Cold is a common mage spell card, inducted into the Legacy set, formerly from the Classic set. 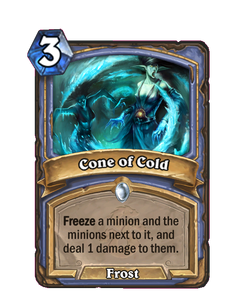 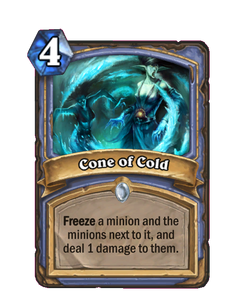 Cone of Cold are obtained for raising mage to level 1.

Two copies of golden Cone of Cold (Core) are obtained for winning 50 games as mage.

Cone of Cold (Core) is uncraftable and cannot be crafted or disenchanted.

This spell has two steps, carried out in the following order despite the card text:

Cone of Cold will Freeze a total of 3 possible minions and deal 1 damage to them. When choosing which enemy minion to cast this spell on, be sure to target the minion that is in between the 2 minions that you want to Freeze/damage. This will ensure you use Cone of Cold's maximum potential, assuming your opponent has 3 or more minions on the field.

When playing against mage, it is good practice to "play around" Cone of Cold whenever possible. Having your high Attack-low Health minions or 1-Health minions as far away from each other as possible is a good idea because this will make it hard for your opponent to Freeze or kill both or all of them at once using a single Cone of Cold. Placing minions that cannot be targeted by spells or Hero Powers or minions with Stealth in between your higher priority minions is very effective against Cone of Cold. If you don't have these at hand, minions that you care less if are Frozen, such as minions that have low Attack-high Health, or minions which are important for other reasons than being able to attack, as well as minions that trigger beneficial effects when they receive a point of damage, are good fillers in between higher priority Cone of Cold targets.

In World of Warcraft, Cone of Cold is a mage spell that behaves similarly to the spell in Hearthstone. It is a point-blank Area of Effect spell that deals frost damage to all enemies in front of the caster. The spell also snares all enemies it hits with a 60% speed reduction for 8 seconds.