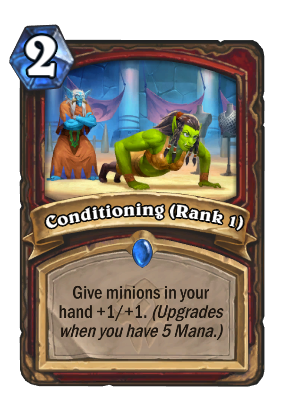 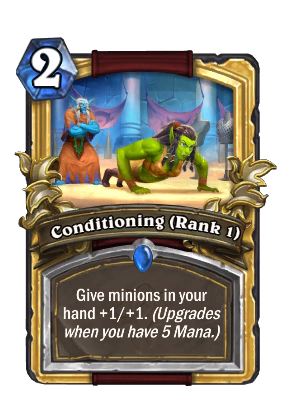 Give minions in your hand +1/+1. (Upgrades when you have 5 Mana.)
Flavor text

Now drop and give me 5 Mana.

Conditioning (Rank 1) is a rare warrior spell card, from the Forged in the Barrens set. 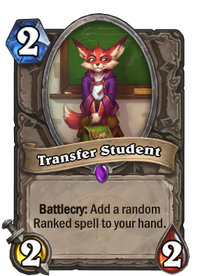 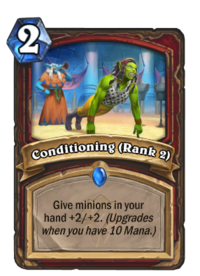 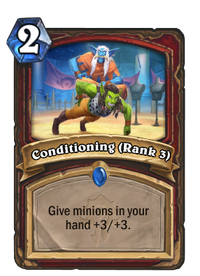 In its base form, this card is effectively a weaker Smuggler's Run for Warrior. While you can play Conditioning this way if you need to (typically against an aggro deck), it's generally better to wait until turn 5 for its first upgrade. Though a slow card, Conditioning's low cost and potent effect at this point means you can quickly make up tempo on the turn you play it.

Rush and Taunt minions are good targets for Conditioning and handbuffs in general. Frenzy minions can benefit from the bonus as well, with higher health making them more difficult to kill in one blow.

In the Standard format, cards like Blademaster Samuro, Warmaul Challenger, Mor'shan Elite, and Carnival Clown will benefit especially well from Conditioning's bonus. You can also use Bulk Up to create additional copies of the latter two. Wild format players have additional options, including Saronite Chain Gang, Doppelgangster, and Magnetic minions.

Based on Bru'kan's flavour text, this card depicts him teaching Rokara in her youth.