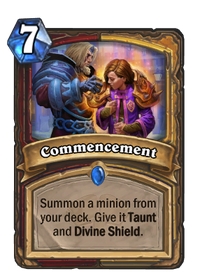 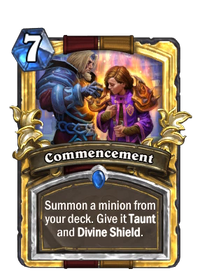 Summon a minion from your deck. Give it Taunt and Divine Shield.

"Remember, graduates—you carry a heavy weight on your shoulders now."

Commencement is a rare warrior/paladin spell card, from the Scholomance Academy set.

This card can be used to cheat a large minion from your deck, with the added benefit of giving it Taunt and Divine Shield. Despite a steeper mana cost, this gives it an advantage over Duel! and Gather Your Party, since the minion will have an immediate impact on the board.

Using Commencement requires specific deck-building. You need to have only large minions, particularly those with high-impact effects. Some good cards include Plagued Protodrake, Rattlegore, and Turalyon, the Tenured. The rest of your deck has to be board control and survivability spells, to ensure Commencement only has good targets and you can live long enough to cast it.

Lord Alexei Barov was the lord of Caer Darrow, Brill, Tarren Mill and Southshore. He was the father of Alexi, Weldon, and Jandice Barov and husband of Lady Illucia Barov. Like Jandice and Illucia, he is now an agent of the Scourge found in Scholomance.