This article is using {{Card template}}.
See Help:Style guide/Card for how to edit this kind of article.
Edit this article
Commanding Shout
1026 • NEW1_036
Regular 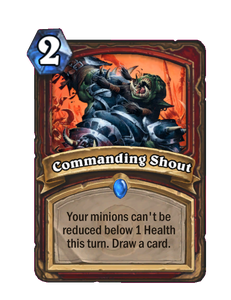 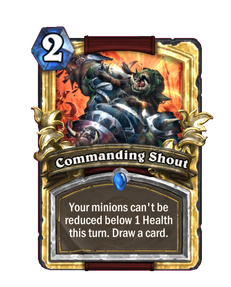 "Shout! Shout! Let it all out!" - Advice to warriors-in-training 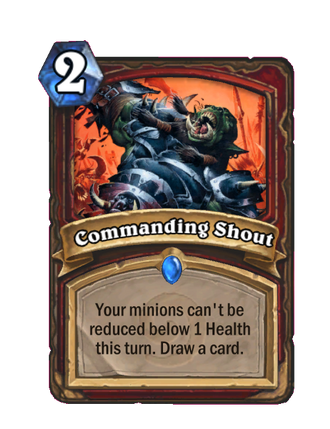 Commanding Shout is a rare warrior spell card, inducted into the Legacy set, formerly from the Classic set. 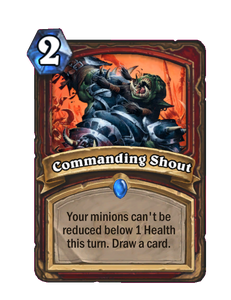 Commanding Shout can be used to let your minions attack your opponent's without any risk of your own minions dying. It can also be used to trigger a Hunter's

Explosive Trap or kill an

Abomination without losing any minions. Most notably the spell combos exceptionally well with

This spell can also be useful for use with vulnerable but high-Attack Charge minions, such as

Wolfrider, since it allows the player to summon the minion and attack with it without it being destroyed.

Commanding Shout is useful in combination with

Grim Patron, allowing you to generate new Grim Patrons by attacking enemy minions, with a new Patron guaranteed even against high Attack targets that would normally destroy the Patron outright. This can also allow you to get through big Taunts like

Sludge Belcher, and build up a huge bonus on Frothing Berserkers. However, be aware that damage-related effects like Grim Patron and Frothing Berserker will not be activated if Commanding Shout causes the target to take 0 damage.

Commanding Shout is a warrior ability from World of Warcraft which increases the health of the warrior and all allies by 10%. It also serves to generate Rage for the warrior.