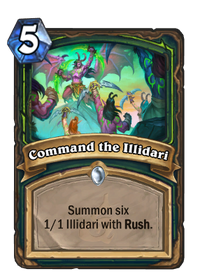 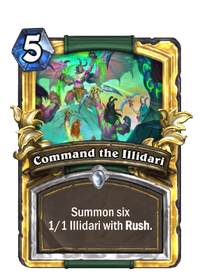 Command the Illidari is a common demon hunter spell card, from the Demon Hunter Initiate set.

Two copies of regular Command the Illidari are obtained after unlocking Demon Hunter class. They cannot be crafted or disenchanted. 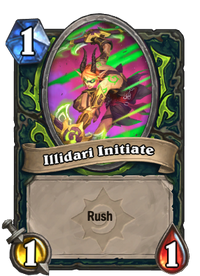 This card synergizes very well with Wrathscale Naga, summoning six 1/1 tokens with Rush that can result in Wrathscale Naga dealing 18 damage split between all enemies. This card is also very effective if used while Nethrandamus is in your hand, as it will increase the cost of minions that Nethrandamus summons by six.

Combining this card with Feast of Souls results in a six card draw for 8 mana.

This spell depicts Illidan Stormrage commanding a group of his army, the Illidari.

The Illidari is the faction of Illidan Stormrage and represents his servants and a specific, elite faction of his army made of demon hunters. The Illidari are also known as Illidan's Forces (or Illidan's forces) or Illidan's army. It consists of various factions that have banded together under Illidan's rule. They were one of the prime enemies of the Alliance and Horde in Outland, the other being the Burning Legion. Illidan commanded vast armies throughout Outland, and even a few select groups on Azeroth.