This article is using {{Card template}}.
See Help:Style guide/Card for how to edit this kind of article.
Edit this article
Coldlight Oracle
1016 • EX1_050
Regular 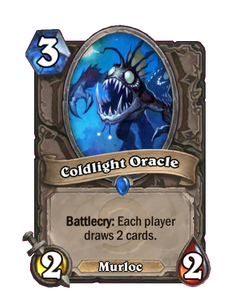 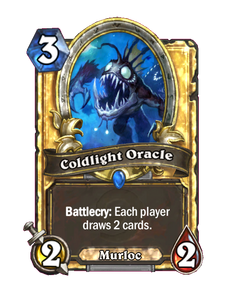 They can see the future. In that future both players draw more cards. Spoooky. 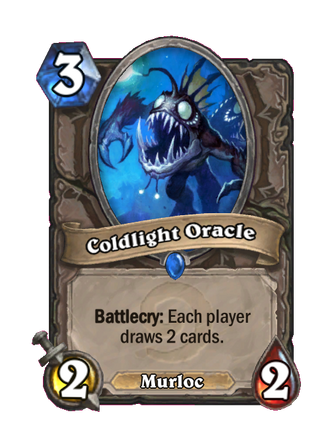 Coldlight Oracle is a rare neutral minion card, inducted into the Legacy set, formerly from the Classic and Hall of Fame sets. 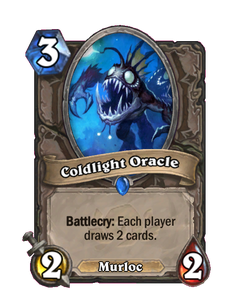 The Coldlight Oracle Battlecry is a significant source of card draw power, but has the downside of also giving your opponent draw power. This makes the card less favorable as generic card draw, but works well in two different cases: combo decks aiming to draw key cards as soon as possible, or forcing the enemy to overdraw.

In combination with cards that allow it to use its Battlecry multiple times, such as

Brann Bronzebeard, it is possible to fill you or your opponent's hand quickly by playing the Coldlight Oracle multiple times. With cards drawn with a full hand, any card that are overdrawn will be displayed and destroyed, and when they have run out of cards in their deck, they will start taking Fatigue damage. Coldlight Oracle is a core card for these types of decks that aim to burn a few cards and attempt to win through massive Fatigue damage, known as mill decks.

Coldight Oracle can also be used as a "last resort" in aggro decks to get draw immediately. Since murloc decks often rely on winning the game early, this card can be used to gain additional draw power to go on the offensive sooner.

Murlocs may be another one of the numerous references to H.P. Lovecraft found in World of Warcraft. In his story The Shadow Over Innsmouth, a man encounters an ancient, fish-human hybrid race known as "The Deep Ones." The story implies that they have been living in the ocean for centuries, and slowly advancing to land, where they will claim it as their own by breeding with coastal humans. Furthermore, the Murlocs' implied worship of deep-sea monstrosities is reminiscent of "The Deep Ones"' fervent worship of their Deep-Sea god, Dagon.

Commentary: Coldlight Oracle is becoming exclusive to Wild for several reasons. It offers unusually strong neutral card draw which can be detrimental to class identity. Its “downside” can destroy opponent's cards and prevent opponents from playing the deck they built—which in turn limits some designs related to Battlecry and effects that return a minion to hand. Taken individually, any one of these reasons might have been enough to prompt a promotion to the Hall of Fame, but when viewed as a whole, we feel that it's time for Coldlight Oracle to leave Standard play.