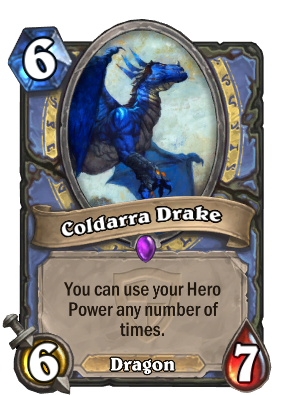 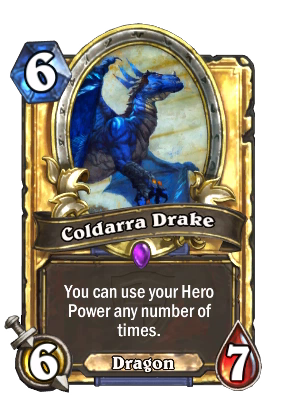 Uncollectible
You can use your Hero Power any number of times.
Flavor text

The Grand Tournament has a "No dragons allowed" policy, but it's rarely enforced.

Coldarra Drake is an epic mage minion card, from the Grand Tournament set. 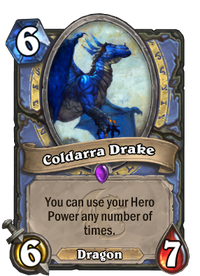 Coldarra Drake can be obtained through The Grand Tournament card packs, or through crafting.

Coldarra Drake (Core) is uncraftable and cannot be crafted or disenchanted.

Example: Whatever the mean you used to get a Coldarra Drake under your control (by playing it, or by a summon, mind control or transform effect), it will refresh your Hero Power during the following Aura Update steps, and will stop doing so as soon as you lose control of it (for example by being killed, returned to the hand or mind controlled).[1]

Coldarra Drake synergizes very well with Justicar Trueheart and Genn Greymane making the pair a formidable late-game duo, especially if one lacks card draw. However, it is worth noting that Justicar Trueheart and Genn Greymane shouldn't be played in the same deck, since Justicar overrides the cost reduction from Genn. Fallen Hero or Wildfire can be used as an alternative if the two damage Hero Power is still wanted with Genn. Can also synergize with other hero power enhancments such as Spirit of the Dragonhawk for Area of effect damage and Pyromaniac to provide card Draw.

It can also be used with Frost Lich Jaina's hero power allowing you to spawn more Water Elemental's in one turn if there are plenty of low health minions on the board.

Its effect can activate the damage threshold of Jan'alai, the Dragonhawk alot easier.

If in the unlikely instance Coldarra Drake is combined with Raza the Chained, such as getting one or the other off of a Kabal Courier, any damage-dealing or buffing Hero Power can turn into a one-turn-kill (if the animation speed allows it) and any healing or Armor-generating Hero Power is a full heal.

Coldarra Drakes are blue drakes residing in the area of Coldarra.

Coldarra is an island just off the coast of the Borean Tundra in Northrend, and is home to the Dragon Aspect of Magic — Malygos. He is known to gather relics of great power, keeping them locked away from mortals in his lair, the Nexus. Frozen orcs, naga, trolls, and wendigos that had dared to enter the sanctity of Malygos' lair can be found throughout the island. They remain frozen, like statues, as a warning to those who would venture into the dragon's lair.