This article is using {{Card template}}.
See Help:Style guide/Card for how to edit this kind of article.
Edit this article
Cobalt Guardian
2030 • GVG_062
Regular 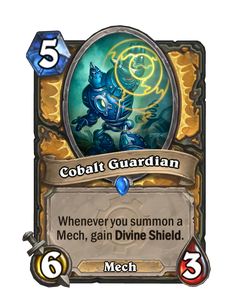 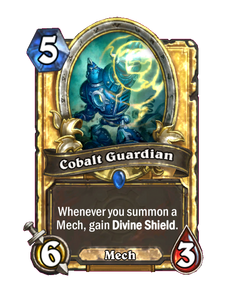 Guardians used to be built out of Adamantium, but production got moved to Gadgetzan and Cobalt was cheap. 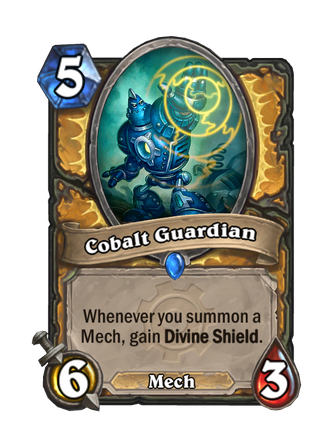 Cobalt Guardian is a rare paladin minion card, from the Goblins vs Gnomes set. 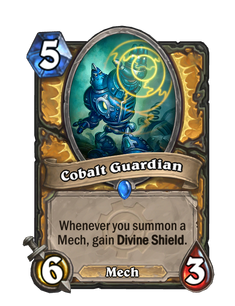 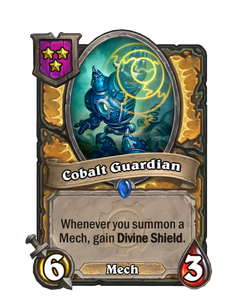 An aggressive statted minion for Mech-based decks, this minion's low Health makes it vulnerable unless it has Divine Shield active. While the most obvious way to protect it is to immediately follow its summoning with another Mech, if this is not possible protective buffs can be useful to allow it to survive until one can be summoned.

By summoning a Mech, the Deathrattle of

Sneed's Old Shredder) will cause this minion to gain Divine Shield. This can be effective for immediately re-shielding a Cobalt Guardian following AoE such as

Flamestrike. In these cases, the opponent should deal damage to the Guardian to first remove its Divine Shield before using AoE that will cause other Mechs to be summoned.

The only known Cobalt Guardian in Warcraft history is one of the four Stone Guard, enchanted stone quilen beasts that guard the entrance to the Mogu'shan Vaults. However, this is clearly a very different guardian to the one depicted in this card.