This article is using {{Card template}}.
See Help:Style guide/Card for how to edit this kind of article.
Edit this article
Clockwork Gnome
2050 • GVG_082
Regular 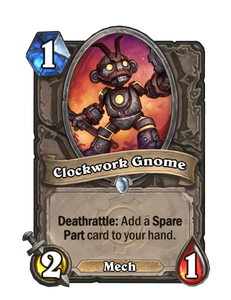 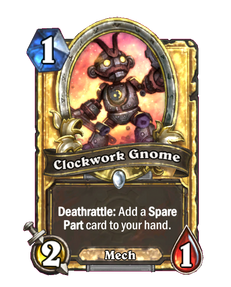 Clockwork gnomes are always asking what time it is. 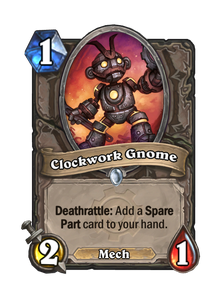 Clockwork Gnome is a common neutral minion card, from the Goblins vs Gnomes set.

Clockwork Gnome provides a lot of value in a Mech synergy deck, as it can provide a turn 1 target for any potential follow-up synergy cards, as well as being played for free alongside Mechwarper. The Spare Part he generates has synergy with tempo cards like Flamewaker and Mana Wyrm, giving him additional use in a Tempo Mage deck. It's also an inexpensive way to contribute to the Journey to Un'Goro Mage Quest, Open the Waygate.

Being a low cost Deathrattle minion means he can work well with Undertaker or Baron Rivendare.

Clockwork Gnome's Deathrattle generates one of the following cards at random. 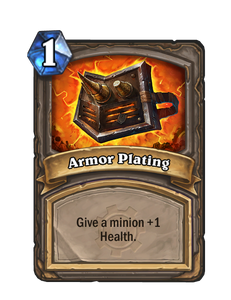 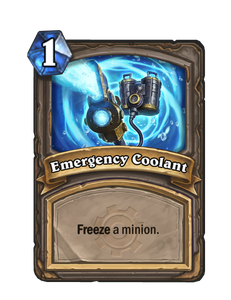 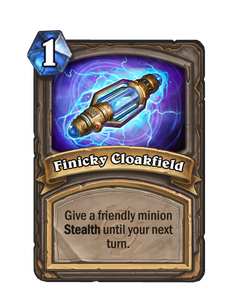 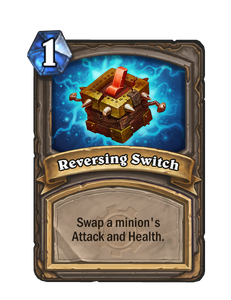 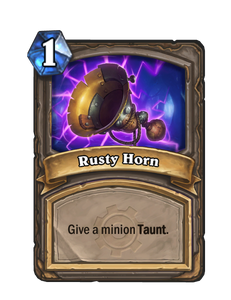 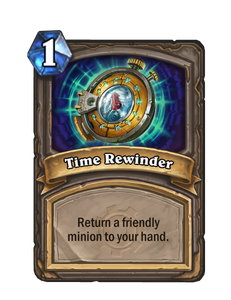 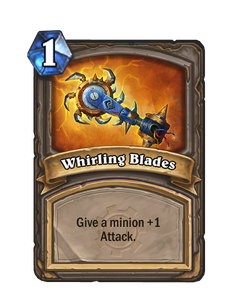 In World of Warcraft, the Clockwork Gnome is a companion, gained through the Archeology profession.

Thought to be an original construct of the titans, the clockwork gnome has some gears smaller than the eye can see.

Clockwork gnomes are a type of mechagnome. Judging by its summoning quote, this clockwork gnome appears to be one of those created by Gearmaster Mechazod. After being reassembled, Mechazod sought to "cure" the gnomes of the Curse of Flesh by converting them back into their original clockwork form, in the process creating a clockwork army with which to set about "curing" the rest of the fleshy inhabitants of Azeroth.

Mechagnomes are small gnome-like clockwork creatures who are found in Northrend. They are titanic creations, similar to the earthen, and are the ancestors of normal gnomes.

The mechagnomes were created by the titanic watcher Mimiron (also refered to as "The Grand Architect") in his own image within Ulduar, apparently as servants and caretakers much like the earthen. Some mechagnomes eventually became gnomes due to the Curse of Flesh. It is however unknown exactly when this happened and how the first fleshy gnomes reacted to it - very little is known about the history of gnomes. It can be presumed that around the time the Titans returned to deal with the curse in the earthen, Mimiron likely used this information to create new mechagnomes that were immune to the curse as well, which is why there are still mechagnomes that exist today.

Amazingly, normal (fleshy) gnomes today still possess the robotic heritage of their ancestors. Normal gnomes can be reverted back into being mechagnomes, despite those gnomes having been flesh for generations. This is not done by merely adding a supplementary spell on normal gnomes in order to transform them, but oppositely by injecting them with something that removes the Curse of Flesh. This means that all normal gnomes are actually still mechagnomes "below" the curse, and undoubtedly proves that normal gnomes are connected to mechagnomes and that mechagnomes are the ancestors of normal gnomes. Likewise, gnomes who have been turned into mechagnomes may be reverted back to their original fleshy form by injecting them with something that 'reverses the reversion' of the curse. The player has to revert several newly "mechanized" gnomes back to their former self in the quest Re-Cursive. After being mechagnomes, most of these gnomes were apparently not fond of having been so. Then again, some of the gnomes felt that being mechanized had "perfected" them.