This article is using {{Card template}}.
See Help:Style guide/Card for how to edit this kind of article.
Edit this article
Clockwork Giant
2233 • GVG_121
Regular 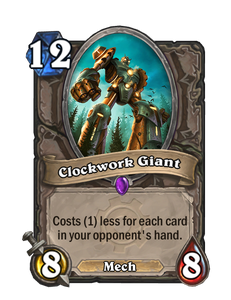 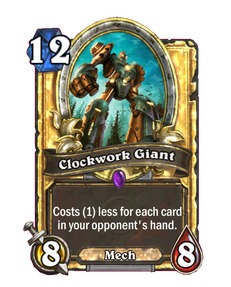 He and Mountain Giant don't get along. 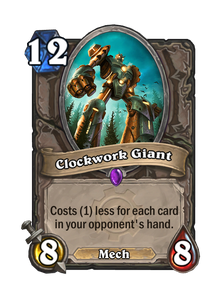 Clockwork Giant is an epic neutral minion card, from the Goblins vs Gnomes set.

Clockwork Giant is a useful card in any match-up against players with large numbers of cards in their hands, such as control decks. When the opponent has only a few cards, the Giant will be a fairly reasonable price, but when the opponent has a large hand it becomes a very efficient (and powerful) option.

If the opponent has 5 cards in their hand, the Giant will be an 8/8 for 7 mana, making it roughly efficient. Above 7 cards the Giant becomes very efficient, potentially providing an 8/8 for just 2 mana.

Could be used in a deck with cards that give draws for your opponent like Naturalize, Coldlight Oracle, King Mukla or Dancing Swords. By increasing the opponent's hand size, the player can directly reduce the cost of their own Clockwork Giant.

As a high-cost card, this has good synergy with Holy Wrath, potentially dealing 12 damage for just 5 mana.