This article is using {{Card template}}.
See Help:Style guide/Card for how to edit this kind of article.
Edit this article
Clockwork Automaton
47439 • GIL_646
Regular 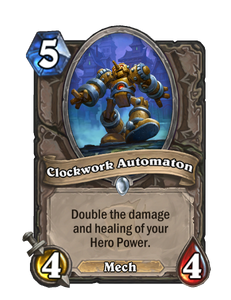 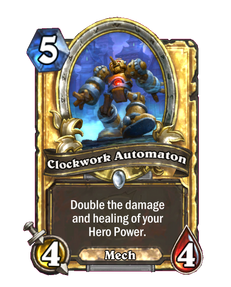 Most mechs are pretty chill, but this one is all wound up. 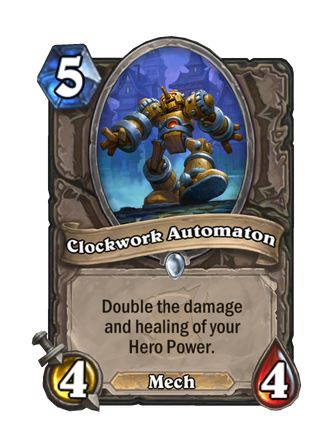 Clockwork Automaton is a common neutral minion card, from the The Witchwood set.

Clockwork Automaton is a minion for decks that make frequent use out of damaging and/or healing Hero Powers.

It is particularly effective with upgraded/alternate Hero Powers, such as the ones from hero cards, upgraded Hero Powers from cards such as

Wildfire, and DIE, INSECT! from

It has good synergy with

Because both damage and healing are doubled, the Lifesteal from

Siphon Life is particularly effective, causing it to deal 6 damage and heal for 12.

This effect is cumulative, with the damage and healing doubling with each additional Clockwork Automaton on the board.

The Clockwork Automaton is creepy, like one of those toys coming to life that you might hear about in a ghost story. The Toymaker in Gilneas is one of the 'good guys,' but for some reason his toys are coming to life and walking the streets. Maybe because they are made using wood from the Witchwood.[1]