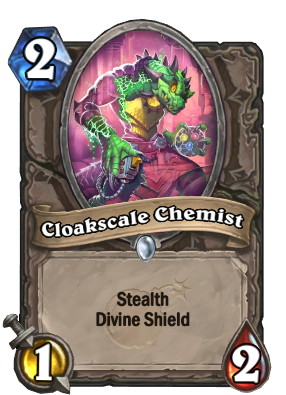 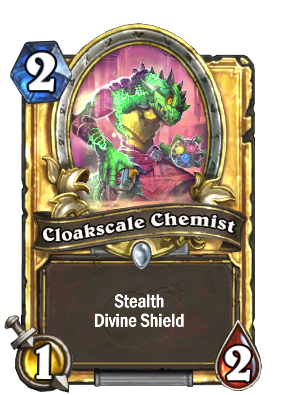 Her suit was fitted using a scale model.

Cloakscale Chemist is a common neutral minion card, from the The Boomsday Project set.

Cloakscale Chemist can be obtained through The Boomsday Project card packs, or through crafting.

Cloakscale Chemist can be used as a reliable way to finish off enemy minions from 1 Health, leaving a 1/2 minion on board afterwards. While efficient trading and board control are valuable, this is considered a sub-par card, with low impact. It is comparable to Silent Knight, trading 1 Attack for mana. However, this often means that it can only deal half as much damage as well. Fire Fly is generally a more flexible and efficient option, summoning two separate 1/2 minions instead of a sticky single one.

Cloakscale Chemist's abilities make it a good target for Poisonous-granting effects, such as Toxic Arrow and Plague Scientist, as it can kill a big minion on your turn and then leave a Poisonous minion threatening another.

In a Divine Shield-oriented deck, this card curves efficiently into both Blood Knight and Rallying Blade, and is more likely to keep its shield up.