This article is using {{Card template}}.
See Help:Style guide/Card for how to edit this kind of article.
Edit this article
Cloaked Huntress
39492 • KAR_006
Regular 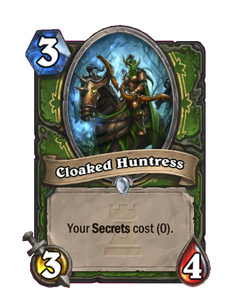 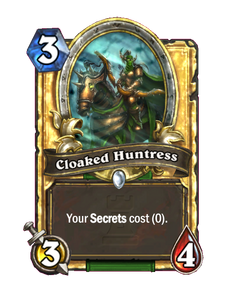 She's practically GIVING your secrets away! 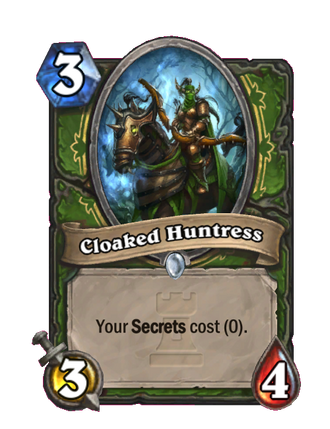 Cloaked Huntress is a common hunter minion card, from the One Night in Karazhan set. 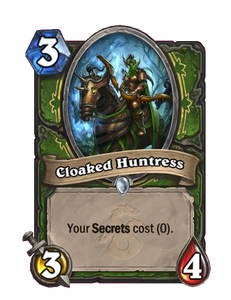 Cloaked Huntress is useful in any Midrange Hunter deck that contains several secrets. She is however most useful in a "Yogg-and-Load" deck as she can combo with

Lock and Load, creating more Secrets that cost 0, which also creates more spells for Yogg-Saron. And multiple Secrets (especially random ones) can be difficult for your opponent to plan around.

The Cloaked Huntress appears to be a female version of Attumen the Huntsman, the first (although optional) boss in the Karazhan raid in World of Warcraft. The Huntress appears to be wearing the same armor as Attumen, and judging by her summoning quote, even rides the same horse: the notoriously powerful and ill-tempered Midnight. Both her summoning and attacking quotes are also quotes from the Attumen encounter.

Attumen the Huntsman is the proud owner of Midnight, the strongest horse in the stables. If his horse is put in danger, he will rush to defend and destroy the attackers. As the first and easiest boss in Karazhan, he is considered a gear check for any adventurers who wish to delve deeper into Karazhan. Attumen is optional; it is not necessary to kill him in order to progress to the later bosses.

Moroes and the Maiden of Virtue are both considered to be substantially tougher.