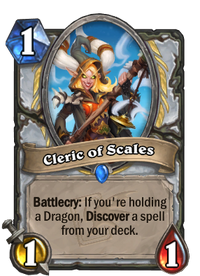 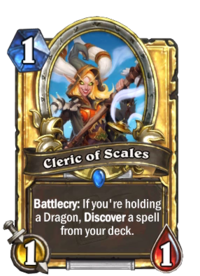 Battlecry: If you're holding a Dragon, Discover a spell from your deck.

If she can't find a spell, it's a clerical error.

Cleric of Scales is a rare priest minion card, from the Galakrond's Awakening set.

Two copies of regular Cleric of Scales are obtained by defeating Cultist Dawnshatter in Galakrond's Awakening's Chapter 2 of Explorers campaign.

Since the Discover is a draw effect, Cleric of Scales lacks the utility of Shadow Visions for creating extra copies of powerful cards like Psychic Scream or Eternal Servitude. It is better suited for combo decks than for control decks for this reason.