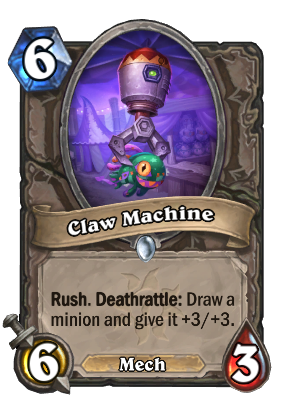 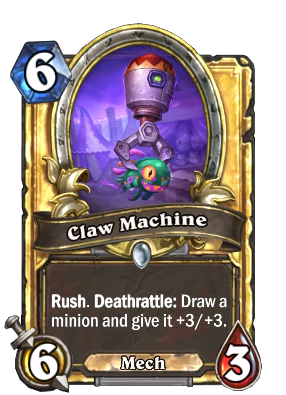 Rush. Deathrattle: Draw a minion and give it +3/+3.
Flavor text

"I have been mrglrlglr… chosen!"

Claw Machine is a common neutral minion card, from the Madness at the Darkmoon Faire set.

Claw Machine can be obtained through Madness at the Darkmoon Faire card packs, through crafting, or as an Arena reward.

Tempo-wise, Claw Machine isn't the best 6-cost minion around. Even when played on curve, its low health makes it unlikely to stay on the board for more than a turn. On the other hand, however, its 6 attack, combined with the Rush ability, make it a useful and versatile removal tool. Evasive Wyrm is a similar minion with the same cost and similar stats, and trades the Deathrattle buff and card draw for the elusive abillity. Drawing a minion and then giving it +3/+3 is not to be scoffed at. The Deathrattle is a key factor in making up for any tempo lost on Claw Machine.

Overall, Claw Machine is a solid minion to include in any control-oriented or menagerie build. The Mech and Deathrattle tags allow it to work extremely well with both N'Zoth, the Corruptor and N'Zoth, God of the Deep. The Deathrattle effect can be exploited by decks running deathrattle activators like Jewel of N'Zoth and Necrium Blade.

Claw Machine appears to be a Gnomish Copter, similar to Sky Claw.