This article is using {{Card template}}.
See Help:Style guide/Card for how to edit this kind of article.
Edit this article
Circle of Healing
1362 • EX1_621
Regular 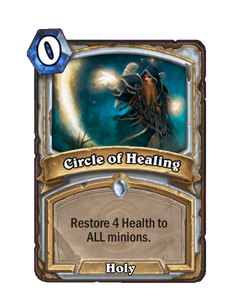 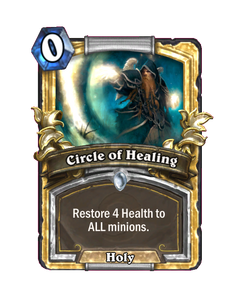 It isn't really a circle. 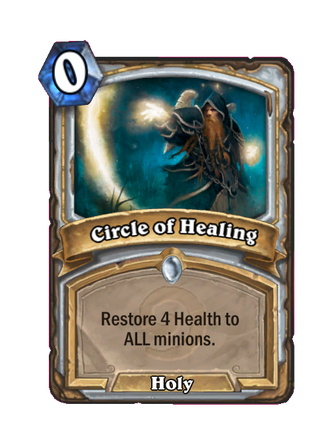 Circle of Healing is a common priest spell card, inducted into the Legacy set, formerly from the Classic set. 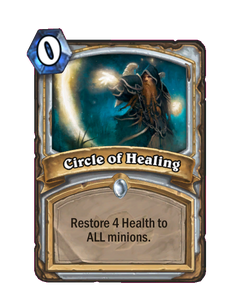 This is a cheap but powerful heal for priests, with the major downside of affecting all minions, including your opponent's. While potentially extremely useful, the right circumstances are therefore required to make the most of this spell.

A common use of this card is in combination with

Auchenai Soulpriest to deal 4 damage to minions, acting as a very effective board wipe. This effectively provides the effect of a

Flamestrike for just 4 mana, but will damage the priest's minions too, reducing the Soulpriest to 1 Health. Unless Silenced, the priest will also be unable to heal the Soulpriest due to their healing effects now dealing damage (although they can still use effects like

Power Word: Shield), which means she will often be destroyed next turn. The combo acts to clear away enemies, with the casting priest usually having no other minions on the board at the time, and can be very useful for allowing priests to survive into the late game against more aggressive decks.

The same effect can also be achieved more efficiently with

Embrace the Shadow, which costs 2 Mana less and doesn't leave a damaged Soulpriest on board.

Injured Blademaster followed immediately by Circle of Healing, allowing the priest to put a 4/7 minion on the board for only 3 mana and two cards. This can be executed as early as turn 3 (turn 2 with

The Coin), which is usually very hard for the opponent to remove in the early stages of the game, gaining the priest a significant advantage from the beginning of the game.

Circle of Healing can be used with several damaged minions and

Northshire Cleric, healing friendly and enemy minions alike, with the undesirable healing compensated for by the substantial card draw. If both

Circle of Healing is a Holy priest healing spell from World of Warcraft. It is a self-targeting 'smart-heal' which heals the 5 most injured party members within 30 yards of the target for a small amount. While its 'smart-heal' effect is useful for saving the priest time selecting individual targets, it also prevents the priest from deciding who will benefit from this spell. This aspect of the ability is exaggerated in its Hearthstone card's trait of affecting all minions, while the WoW spell only affects friendly party members.

As an instant auto-targeting multi-target heal, Circle of Healing is extremely effective when the priest is unable to output enough healing through other means, and consequently comes with a cooldown, added in Wrath of the Lich King after constant spamming of this ability became a common strategy for Holy priests. In the current game, the spell is a powerful instant AoE healing option for Holy priests.