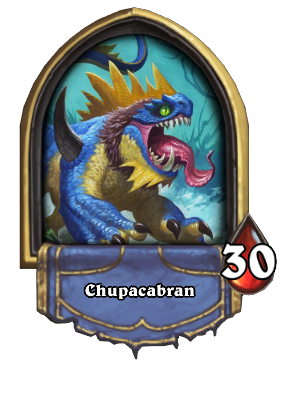 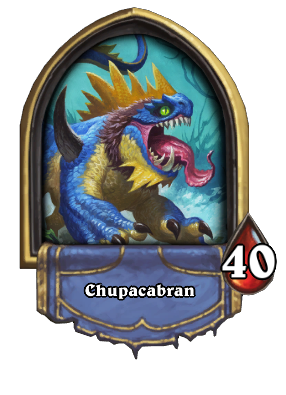 It used to feed on local livestock. Now it hungers for more.

Chupacabran is a boss that can be encountered during the Monster Hunt. 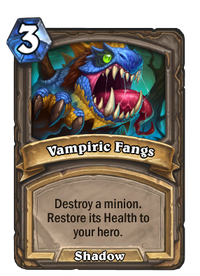 As Cannoneer, you want to utilize your cannon to take out minions with lifesteal to deny value from the effect. If possible, try to rush it down before the lifesteal effect can be applied to larger minions.

Try to bait our the vampiric fangs before you play any big minions to prevent larger tempo swings that often lose games.

As Houndmaster, you want to make sure to not leave smaller minions such as your bloodhounds on the board, but instead try to buff two or three minions so the lifesteal minions don't deal damage and heal multiple times, but at the same time, watch out for his vampiric fangs, but after that, having one minion getting consistently buffed and protected with spells would be ideal, since no other removal spells are run in its deck.

As long are you are able to clear their minions you should be able to quickly outvalue him.

As Tess you should be able to outvalue him pretty fast. If you went with trapper buckets, you can place the same traps over rand over and he will eventually die. Make sure you have some big minions or any source of discover creatures (such as hallucination or the journey below), or some sort of creature removal, so that you can deal with its big taunts he will play at the end of the match.

Hagatcha The Witch
The Chupacabran. Oh, how hard I worked to make him mine!

Chupacabran is original to Hearthstone.

The Chupacabran is an obvious reference to the chupacabra (Spanish for "goat-sucker"), a bloodsucking cryptid that allegedly lives in parts of the Americas and feeds on livestock.