This article is using {{Card template}}.
See Help:Style guide/Card for how to edit this kind of article.
Edit this article
Chromaggus
2280 • BRM_031
Regular 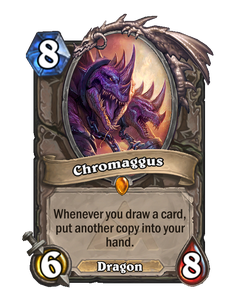 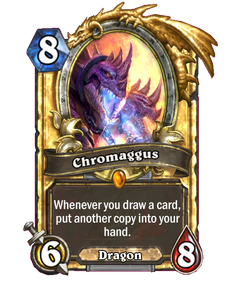 Dimensions: Full • 330 x 410px
Elite
Whenever you draw a card, put another copy into your hand.
Flavor text

Left head and right head can never agree about what to eat for dinner, so they always end up just eating ramen again. 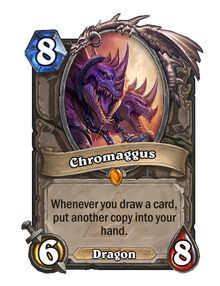 For the boss of the same name, see Chromaggus

Chromaggus is a legendary neutral minion card, from the Blackrock Mountain set.

Unlike Ysera, Chromaggus usually has to survive until the start of your next turn to get the guaranteed value of duplicating a drawn card. However, there are ways to guarantee value:

What’s worse than a horrible mutant dragon monstrosity that uses magic? A horrible mutant dragon monstrosity that uses five types of magic, obviously! Chromaggus unleashes abilities ripped from the flesh of all five dragon flights. Don’t ask how he got those powers. Viscera are involved. Hey, we told you not to ask! You’ll have to battle the chromatic horror before you can take on Lord Victor Nefarius.[23]

Chromaggus is a two-headed dragon beast in Nefarian's service, who resides in Blackwing Lair, coming after Flamegor and before Nefarian. He drops the Tier 2 shoulders for all classes.

One of the most challenging aspects to Chromaggus is the randomness of his abilities. As the name suggests (the word chromatic is derived from "khroma", the Greek word for "color", suggesting Chromaggus takes his powers from dragonflights of all colors), Chromaggus shimmers in a variety of colors, which relate to his current abilities. These abilities are determined upon instance creation, and will only be reset with the instance timer.

Despite his canine appearance, he's actually a dragonkin. It is speculated that he was created by Nefarian experimenting on captured Core Hounds, such as The Beast found in Upper Blackrock Spire, possibly by feeding or injecting dragon blood from various dragons from all dragonflights.