This article is using {{Card template}}.
See Help:Style guide/Card for how to edit this kind of article.
Edit this article
Cho'Gall
68021 • Story_06_ChoGall_007hb
Regular 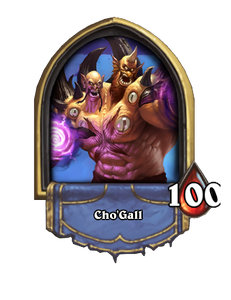 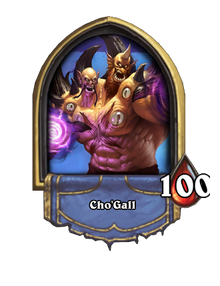 Cho'Gall is the seventh boss in Rogue's Book of Heroes adventure. 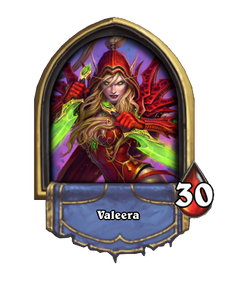 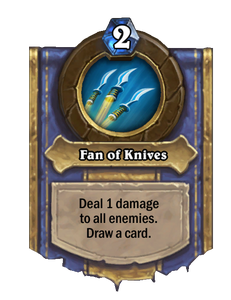 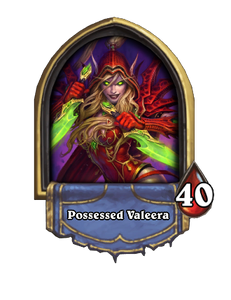 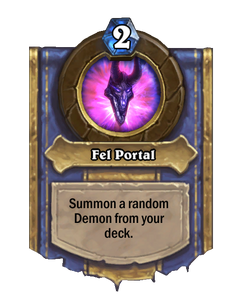 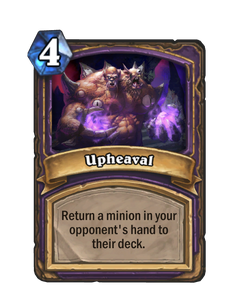 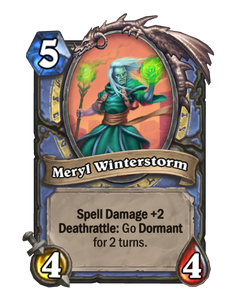 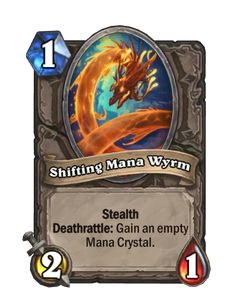 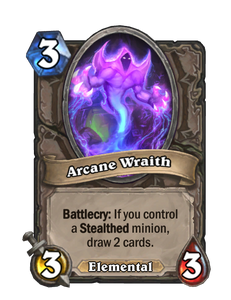 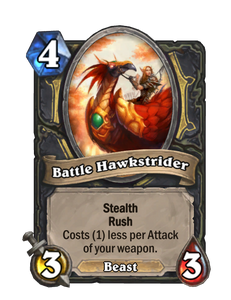 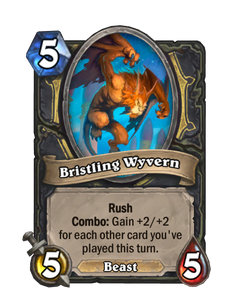 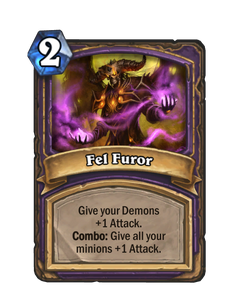 Valeera (present)
I'd gone against enough opponents to know better than taking on the entire demented Twilight's Hammer cult by myself.
Jaina's ally, Meryl Winterstorm, agreed to help me. Together, we teleported into that cursed desert...

Valeera
Wait... we have to fight THAT?
Cho'Gall
Hahahahaha!

Cho'Gall
Your words are empty.

Cho'Gall
My power will be the key that unlocks C'Thun's return...
Whatever the master desires, he shall have...
You cannot unravel our work. It has only just begun.

Meryl Winterstorm
I thought he was dead...

Cho'Gall
You are truly pathetic, elf. But there is a greater power within you!
Valeera
Uh... let's not talk about that.

Meryl Winterstorm
The demon within you is restless, Valeera.
Valeera
It's getting harder to control!

Valeera
My strength is gone. I have to do this, Meryl... I have to draw on the demon's power!
Meryl Winterstorm
Valeera, no!

Cho'Gall
Aaa!
Meryl Winterstorm
We've driven Cho'Gall back! Now, demon, come to me. Am I not the worthier host?
Possessed Valeera
You are one of the Tirisfalen... I accept your offer.

Mark of Kathra'natir is given to Meryl Winterstorm, Valeera returns to her former appearance

Valeera
Meryl! Will you be all right?
Meryl Winterstorm
Yes. For you to be safe, I will bear this burden.

Cho'Gall
The master's return proceeds according to plan... All shall be chaos and ash!

Cho'gall (sometimes spelled Cho'Gall) was a powerful ogre mage, Initiate of the Fifth Circle of the Shadow Council, and Chieftain of the Twilight's Hammer clan. Cho'gall managed to survive with remnants of his clan when Gul'dan was torn to shreds by demons during his quest to find the Eye of Sargeras toward the end of the Second War. Fleeing to Kalimdor and taking refuge within the ruined city of Ahn'Qiraj, Cho'gall's body became warped by the power of the Old God C'Thun.

With the return of Deathwing and the Shattering that followed in his wake, Cho'gall aligned himself and the Twilight's Hammer with the corrupted Aspect and his allies, the powerful Elemental Lords Al'Akir and Ragnaros, to help usher in the end times. Overseeing the cult's efforts from his citadel in the Twilight Highlands, Cho'gall was struck down by champions of Azeroth within his own throne room.

Cho is the name of the ogre's two-eyed right head (shown on the left), while Gall is the name of the one-eyed left head (shown on the right). Each speaks with its own voice and indeed has its own personality, the two at times even clashing over the actions to be taken by their one, shared body. Cho is generally held to be the primary personality, with Gall's in-game quotes often displayed in parentheses following Cho's lines; Gall often responds to Cho's quotes rather than speaking for himself. While Cho's voice is deep and powerful, Gall's is higher-pitched and more maniacal.

In Heroes of the Storm Cho has control over the ogre's massive body, while Gall is powerless but to be carried wherever Cho goes. While Cho therefore controls the body's brutish strength, Gall commands the majority of the pair's warlock powers.