Hearthstone Wiki
Register
Don't have an account?
Sign In
Advertisement
in: All cards, Wild format cards, Pages with no result queries, Yetis

This article is using {{Card template}}.
See Help:Style guide/Card for how to edit this kind of article.
Edit this article
Chillwind Yeti
90 • CS2_182
Regular 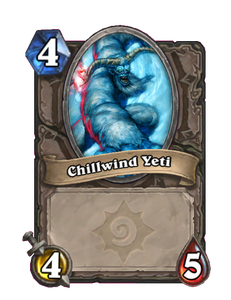 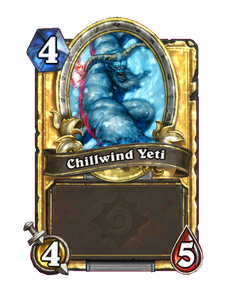 He always dreamed of coming down from the mountains and opening a noodle shop, but he never got the nerve. 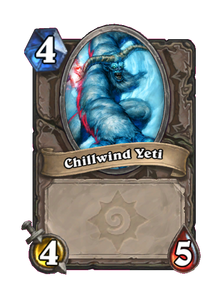 Chillwind Yeti is a neutral minion card, inducted into the Legacy set, formerly from the Basic set. 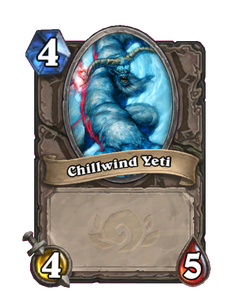 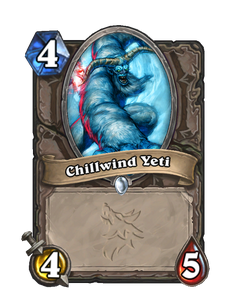 Regular and golden Chillwind Yeti are uncraftable and cannot be crafted or disenchanted.

Two copies of regular Chillwind Yeti are obtained for raising sum of all your class levels to 1.

Two copies of golden Chillwind Yeti (Core) are obtained for winning 500 games across all classes.

Chillwind Yeti (Core) is uncraftable and cannot be crafted or disenchanted.

Chillwind Yeti is a solid 4/5, and while lacking any special abilities, finds a favourable position among the available minions. Its 4 Attack protects it from priests' Shadow Word: Pain and Shadow Word: Death, while its 5 Health frequently enables efficient trades. Because of its versatility and consistent cost efficiency, Chillwind Yeti is widely considered a strong choice for Arena and constructed play.

Yetis are large, furry humanoid animals that usually live in or near caves. Some of the varieties in colder regions breathe ice breath. Yetis are skinnable, unlike most humanoids. Yetis can be found in Feralas, the Hillsbrad Foothills, Winterspring, and the Alterac Mountains. They can also be found in Northrend.

Chillwind Point is a small rise on the far eastern edge of the Alterac Mountains region. It is dominated by a small, ancient troll ruin and named for the chill winds that sweep through the nearby ravine from the Western Plaguelands to the north. Chillwind Point is often mistaken for Chillwind Camp located just to the north, an Alliance outpost just inside the plaguelands. This pass was previously part of the kingdom of Lordaeron.