This article is using {{Card template}}.
See Help:Style guide/Card for how to edit this kind of article.
Edit this article
Chef Nomi
52434 • DAL_554
Regular 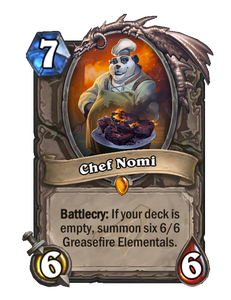 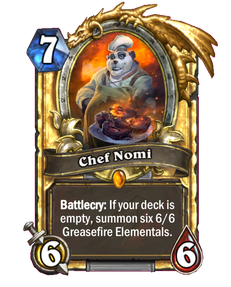 Chef Nomi is a legendary neutral minion card, from the Rise of Shadows set. 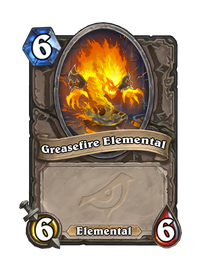 Chef Nomi's Battlecry is extremely conditional, but extremely powerful when it does go off. A board full of 6/6s is very difficult to remove short of a Twisting Nether or Brawl and can outright win the game in your favor if the opponent doesn't have a way to deal with them. However, his condition requiring an empty deck means that in most cases he can only be used in very long matches going into Fatigue. Fortunately, Chef Nomi will shine in these cases in matches that have went on for this long as each players are running out of resources and are less likely to have a large board clear saved up.

Another method of using Chef Nomi is to use Rogue. Myra's Unstable Element can be used to empty the deck much earlier than possible, and the Rogue can easily shuffle in more cards into their deck afterwards. Rogue also has a plethora of options to return Chef Nomi to your hand (such as Shadowstep and Vanish) or to shuffle him back into your deck (such as Togwaggle's Scheme or Lab Recruiter), giving you multiple ways to continuously abuse his effect. Alternatively, Priests can run a draw-heavy deck with Northshire Cleric and Gadgetzan Auctioneer to cycle their deck quickly, while also using Seance to replay Chef Nomi multiple times and Grave Horror for mid-game pressure and protection.

Chef Nomi is often followed up with Archivist Elysiana, taking your deck out of Fatigue, and works well with Zephrys the Great.

Nomi is a pandaren boy who is ready and willing to learn cooking from the teacher when summoned by the Cooking School Bell. He offers a series of daily quests to help improve his cooking, beginning with Lesson 1 and eventually progressing to Lesson 5. Once Nomi has completed his learning, he will give a one-time quest to thank his teacher. From thereon, the adventurer will have access to the daily quest which rewards an Ironpaw Token and Goodies from Nomi (contains a random skill level 600 food).

Once he got old enough, Nomi tried adventuring for a bit, but found cooking to be his passion. Now a teenager, he caught up with his old master in the Broken Isles with an offer to work together once again. Soon after, Nomi got work at a kitchen in Dalaran.

Nomi's fiery Hearthstone abilities is a reference to the Work Orders that players can place with him in Dalaran to produce Cooking recipes. Due to his poor Cooking skills, the majority of the time these Work Orders will merely yield some Badly Burnt Food or Slightly Burnt Food, which in turn spawned a large number of memes and jokes in the community about Nomi being obsessed with fire.