This article is using {{Card template}}.
See Help:Style guide/Card for how to edit this kind of article.
Edit this article
Cheesemonger
64721 • SW_073
Regular 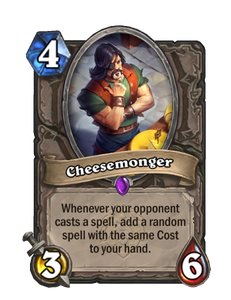 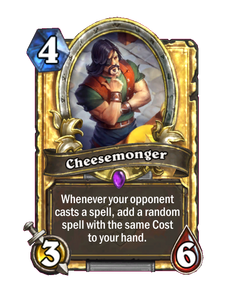 Click here for full resolution image
Whenever your opponent casts a spell, add a random spell with the same Cost to your hand.
Flavor text

Secretly, the Big Cheese of SI:7.

Cheesemonger is an epic neutral minion card, from the United in Stormwind set.

Cheesemonger can be obtained by:

This card is comparable to Ogremancer, being a well-stated minion with an effect that discourages enemy spellcasting. Cheesemonger costs 1 mana less to play, at the cost of having 1 less health and provides more long-term value instead of board presence. While the quality of the cards one can receive is random, spell cards are generally much higher in value than the 2/2 Taunts which Ogremancer summons. So long as one can keep their hand at a reasonable size to keep from overdrawing, Cheesemonger has the potential to be a very strong tool in Control or Value decks, particularly against classes like Demon Hunter and Mage, who can cast lots of spells.

Cheesemonger is the Hearthstone representation of Elling Trias, the owner of Trias' Cheese in Stormwind's Trade District. He was formerly a master rogue and implied to have been a member of SI:7, still maintaining a web of shady contacts. Eventually, he retired from that life to pursue his life's true passion: Making cheese.