This article is using {{Card template}}.
See Help:Style guide/Card for how to edit this kind of article.
Edit this article
Charge
344 • CS2_103
Regular 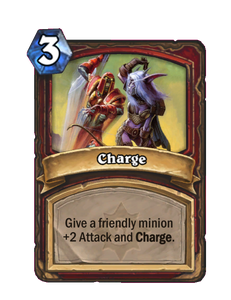 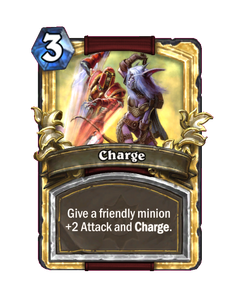 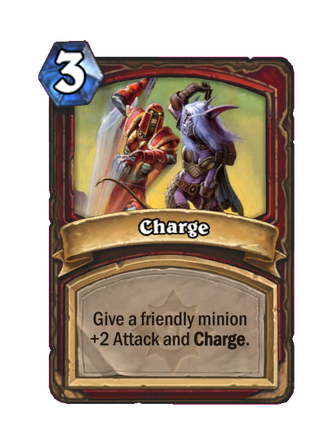 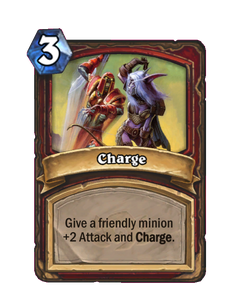 Regular and golden Charge are uncraftable and cannot be crafted or disenchanted.

Example: If the affected minion is copied by

Faceless Manipulator on a later turn, the full enchantment is copied, allowing the copy to attack on its first turn in play.[1][2]

Charge saw various incarnations over the course of the game's alpha and beta. Its earliest known form had the text "Give your minions Charge this turn." and cost 0 mana. This version saw many players using it as a one turn kill combo on later turns: they would play several high-Attack minions from the hand, followed by a 0-mana Charge, allowing for huge amounts of face damage in a single turn. In this respect it was similar to the version of

Unleash the Hounds in play at that time (1 mana, "Give your Beasts +1 Attack and Charge."), which was changed around a month before Charge.

In October 2016 the card was changed again, reducing its cost to 1 and giving it the new text "Give a friendly minion Charge. It can't attack heroes this turn." This change finally provided a solution to the developers' concerns around the card's ability to grant Charge, and was one of the last stages of their previously announced plan to reduce the presence of effects that granted Charge, as seen with the earlier nerf to

Warsong Commander (previously granting Charge to any friendly minion with 3 or less Attack). The new version's restrictions prevented it from being used for finishing combos, thus opening design space for future cards, while still retaining the card's core design.