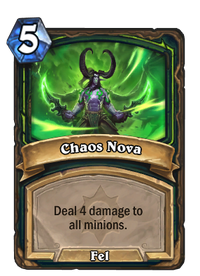 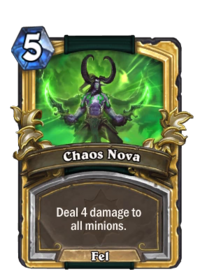 Deal 4 damage to all minions.

Illin' Illidan laying down the damage, flinging out the chaos as far as he can manage.

Chaos Nova is a demon hunter spell card, inducted into the Legacy set, formerly from the Basic set. 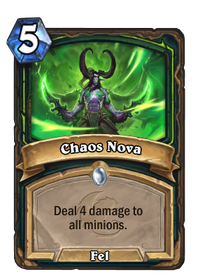 Two copies of regular and golden Chaos Nova are automatically given after the player completes the Ranked's New player experience system, unlocking Wild and Classic format.

Chaos Nova (Core) is uncraftable and cannot be crafted or disenchanted.

If you have no minions on the battlefield, Chaos Nova can be used as a two mana cheaper Flamestrike. This card can be used to effectively remove multiple enemy minions, and can benefit from Feast of Souls if used while there are friendly minions on the board as well.

Chaos Nova is a Havoc demon hunter ability in World of Warcraft. It unleashes a burst of fel fire around the caster, damaging and stunning all nearby enemies.