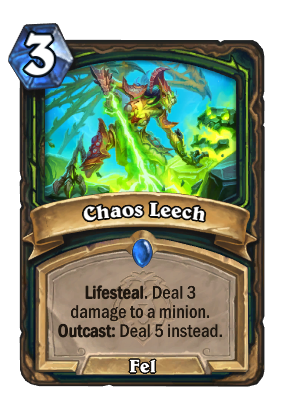 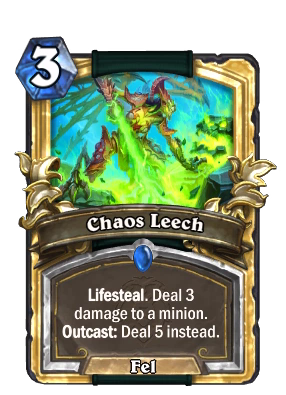 Otherwise known as a nematode.

Chaos Leech is a rare demon hunter spell card, from the United in Stormwind set.

Chaos Leech can be obtained by:

On its base, it is exactly just like Eye Beam. But as a Outcast, it is a stronger version of Eye Beam instead of costing 1 mana, it deals 2 additional damage. However it can be discounted with Felgorger, Sigil of Alacrity or Final Showdown to be the same as Eye Beam with Outcast effect

Because it deals 5 damage, it can do well against stronger minions and heal much more. However it will still cost 3 mana meaning it will be harder to play with other cards in your hand unlike Eye Beam.

Chaos Leech can be included in decks alongside Eye Beam for additional healing or using Il'gynoth to deal 5 damage to the enemy hero.